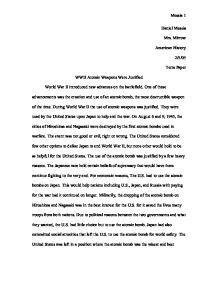 Daniel Messia Mrs. Mirrow American History 2/5/05 Term Paper WWII Atomic Weapons Were Justified World War II introduced new advances on the battlefield. One of these advancements was the creation and use of an atomic bomb, the most destructible weapon of the time. During World War II the use of atomic weapons was justified. They were used by the United States upon Japan to help end the war. On August 6 and 9, 1945, the cities of Hiroshima and Nagasaki were destroyed by the first atomic bombs used in warfare. The event was not good or evil, right or wrong. The United States considered few other options to defeat Japan to end World War II, but none other would hold to be as helpful for the United States. The use of the atomic bomb was justified by a few heavy reasons. The Japanese race held certain beliefs of supremacy that would have them continue fighting to the very end. For economic reasons, The U.S. had to use the atomic bombs on Japan. This would help nations including U.S., Japan, and Russia with paying for the war had it continued on longer. Militarily, the dropping of the atomic bomb on Hiroshima and Nagasaki was in the best interest for the U.S. for it saved the lives many troops from both nations. Due to political reasons between the two governments and what they wanted, the U.S. had little choice but to use the atomic bomb. ...read more.

It was also of a great wartime importance due to the amount of various industries, including the production of ships, military equipment, ordnance, and other war materials. The city was attacked due to its industrial importance to the country. These bombings proved to be successful for the military. Had the military pursued another course of action such as an invasion from the south by the United States, it would have claimed many more lives, from both Americans and Japanese. The United States and Japan fought in The Battle of Okinawa, on the island of Okinawa in the Ryukyu Islands, which became the biggest amphibious assault during the Pacific campaign of World War II. The results proved an invasion would be disastrous for both sides. Nearly a third of the total population of Okinawa was killed during this major battle. It was the largest sea-land-air battle in history, running from April through June, 1945 claiming about 100,000 Japanese killed or captured; yet many preferred suicide to the disgrace of capture. The battle also took over 72,000 Americans in casualties. This could have been considered as a preview of what would happen if an invasion took place, thousands to millions of deaths from both sides. Japanese civilian loss of life from a United States invasion would have easily far exceeded the amount of lives lost in both atomic bombings. The bombings were inhuman and done in the wrong manner to cities where there was not a major military base, where the population was also of other races being unjustified. ...read more.

Yet again the Japanese army was killing in gruesome inhumane ways. Also to be included as acts of atrocities is their attack on Pearl Harbor, also killing innocent soldiers. Their acts would not be put to rest until they were defeated. An invasion would have led to more captures of soldiers allowing the Japanese to commit gruesome acts of murder. By using the atomic bomb the United States could keep their soldiers from capture by Japanese, and end their acts of violence against the war the quickest and most efficient way. Throughout the Second World War new inventions of military tactics were introduced to the world. The atomic bomb was used to protect the world and end World War II as quickly as possible. It was justified through the amount of reasoning behind it. The Japanese beliefs made it worse for any nation to invade the homeland to fight in a head on battle because that would result in many more deaths. To keep the atomic bomb and use an invasion or continuous blockade on Japan would cost the United States a fortune and elongate the war for many years. The bombings were strategic and effective to the role of surrender by Japan. Politically the atomic bomb proved to be a choice of sacrificing others for the benefits of many more on both sides of the battle field. And in an effort to end the atrocities of World War II the atomic bomb was dropped to bring a peaceful era, an end to the war. For the duration of World War II the employment of atomic weapons were justified. Messia 1 ...read more.