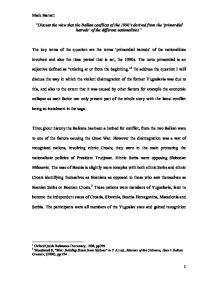 The key terms of the question are the terms 'primordial hatreds' of the nationalities involved and also the time period that is set, the 1990s. The term primordial is an adjective defined as "existing at or from the beginning."1 To address the question I will discuss the way in which the violent disintegration of the former Yugoslavia was due to this, and also to the extent that it was caused by other factors for example the economic collapse as each factor can only present part of the whole story with the latest conflict being an instalment in the saga. Throughout history the Balkans has been a hotbed for conflict, from the two Balkan wars to one of the factors causing the Great War. However the disintegration was a war of recognised nations, involving ethnic Croats; they were in the main protesting the nationalistic policies of President Trudjman. Ethnic Serbs were opposing Slobodan Milosevic. The case of Bosnia is slightly more complex with both ethnic Serbs and ethnic Croats identifying themselves as Bosnians as opposed to those who saw themselves as Bosnian Serbs or Bosnian Croats.2 These nations were members of Yugoslavia, later to become the independent states of Croatia, Slovenia, Bosnia-Herzegovina, Macedonia and Serbia. The participants were all members of the Yugoslav state and gained recognition as states later, after it's collapse. ...read more.

Throughout the Yugoslav society there was major disequilibria, i.e. "satisfied groups" Vs "dissatisfied groups". Not only did the constitution create social unrest, it also created huge problems in making common solutions to economic problems that they would face. After the 1960s Yugoslavia experienced an economic stagnation. The various reforms that Yugoslavia tried to make had failed. The foreign loans that Yugoslavia did receive it squandered away. As a result, for the general public the real income was halved. There were also two broad political groups that split Yugoslavia, with the reformists wanting a change in policy in Yugoslavia and the conservatives who were content with what was happening and not wanting vast change. The disequilibria that was present throughout created ill feeling among the five Republics. The richer states felt that the poor, who felt that they were being underprovided for, were exploiting them. Serbia was also aggrieved at the net contributor status. The economic disintegration made the Republics more inward looking and autarkic. With the investments made being kept local. Its trade was also very Western orientated. The nationalism experienced during this period was strong. Riving the names, symbols and uniforms of the nationalistic right-wing element throughout World War II, primarily the Chetnik monarchists and the Ustasha, using this image for the paramilitary forces involved in the Yugoslav break-up. Fighting can also be argued to be a result of the individual. ...read more.

However afterwards these feeling were quashed in the name of unity, to protect all from the absorption of both the USA and Soviet Russia. "They did not disappear and were passed on, for example, by oral family traditions."6 To conclude, the period of the Yugoslav stability was rarely seen and quite abnormal for it to have peaceful coexistence for so many decades. Therefore the main question is what kept it together for so long? The threat of Communism had a key role, the Cold War created an atmosphere of external and also internal discipline, which was needed throughout the Federal Republic of Yugoslavia. The socialist economy failed due to the interference of the government and the policies taken by some, particularly to keep Slovenia out of the civil war. Throughout the economic decline, the stagnation and the halving of real income, more discontent created an agenda for change. The struggle for Yugoslavia was seen as one between the elite, in a quest for privilege, however in a climate of reformist pressure. A result was the Old Guard took control in Serbia and the reformists in Slovenia. The spiralling nationalism was also an outstanding feature of the discontent and a root of the Balkan conflicts of the 1990s. The primordial hatreds felt by the nations involved had in impact, but that was not the only reason for the disintegration of Yugoslavia. The conflict was one of national, territorial, political and economic struggle, however, fought under the guise of ethnic hatred. ...read more.