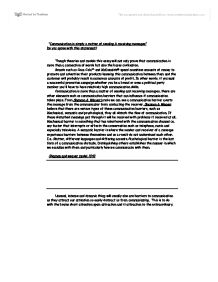 &amp;#147;Communication is simply a matter of sending &amp; receiving messages&amp;#148; Do you agree with this statement?

Each receiver has it own advantages and disadvantages, I.E television uses both sound and vision as a channel and so has a major affect on society's beliefs nonetheless, unlike other channels in does not have immediate feedback. Lasswells model can easily be applied to any form of mass media, I.E Lasswells Model 1948 [image001.gif] [image001.gif] The model shows how much authority and power the media has on influencing their audiences. Lasswell's model is explained as a linear model due to the models communication process working as a straight line. Braddock's extends Lasswells model with additions such as Under what circumstances the message has been sent? and For what purposes? By this Braddock means the conditions in which the message is being exchanged I.E. group of peers, classroom, funeral and weddings and why in the communication is taking place at all. Braddock's extension of Lasswell's model [image001.gif] [image001.gif] Osgood & Schramm Model highlights the circular nature of communication due to the fact it works as a circular mode. ...read more.

By sending the message the sender will have to judge the most accurate way to send the message to the planned target, just like a dart to the Bull's Eye. Shannon & weaver model Berlo 1972 [image002.gif] [image003.gif] According the Berlo model the sender and the receiver have to share skills, personal characteristics, social class and culture for a smooth communication to take place. Social class, language and ethnicity actually affect the thoughts themselves. The words we can command, and the way that we put them together affect what we think about how we think whether we are thinking at all. This model does not allow multiculturalism to exist so has criticized. We communicate as it is the bases of our world. At some time our messages maybe twisted due to interruptions and disruptions in the channel and your ability to under the message. Feedback allows us to deem if our message has been an achievement. Nevertheless the result of our communication results from the entire elements involved in the building of the communication. [image004. ...read more.