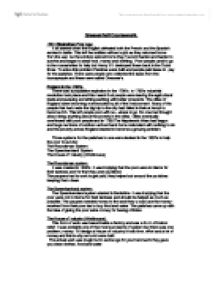 Gressenhall Coursework. 1601 Elizabethan Poor Law: It all started when the English defeated both the French and the Spanish armies in battle. This left the soldiers without a job as they returned home from the war. As the soldiers arrived home they found it harder and harder to survive and began to steal food, money and clothing. Poor people used to go to the monasteries for help but Henry VIII destroyed these back in the Tudor times. To solve this problem Parishes were built and people paid taxes to pay for the parishes. There were people who collected the taxes from the townspeople and these were called Overseer's. ...read more.

Cities eventually overflowed with poor people and in 1793 The Napoleonic Wars had begun and huge numbers of soldiers arrived back home redundant with nothing to do and the poverty across England started to become a growing problem. Three systems for the parishes to use were devised in the 1830's to help the poor to survive: The Roundsman System The Speenhamland System The House of Industry (Workhouse) The Roundsman system: It was created in 1830's. It was implying that the poor were to blame for their laziness and for that they were punished. The paupers had to work to get paid, they helped out around the parishes keeping them clean. ...read more.

To design a House of Industry it took time, effort and a lot of money and this is why not a lot were built. The actual work was tough but in exchange for your hard work they gave you clean clothes, food and water. Conclusion: I think the overall state of the poverty throughout England was terrible and something should have been done about it a long time ago. Their methods used to cure the poverty weren't very well thought out and had several flaws. It only really got better when the three systems; Roundsman, Speenhamland and The House of Industry were introduced but even then things weren't exactly perfect and several of these systems had flaws in them. Something needed to be done before it went spiralling out of control. ...read more.