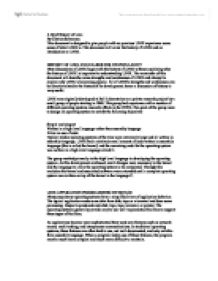 A Brief History of UNIX.

A Brief History of Unix By Charles Severance This document is designed to give people with no previous UNIX experience some sense of what UNIX is. This document will cover the history of UNIX and an introduction to UNIX. HISTORY OF UNIX AND CAUSES FOR ITS POPULARITY Most discussions of UNIX begin with the history of UNIX without explaining why the history of UNIX is important to understanding UNIX. The remainder of this document will describe some strengths and weaknesses of UNIX and attempt to explain why UNIX is becoming popular. All of UNIX's strengths and weaknesses can be directly related to the history of its development, hence a discussion of history is very useful. UNIX was originally developed at Bell Laboratories as a private research project by a small group of people starting in 1969. This group had experience with a number of different operating systems research efforts in the 1970's. The goals of the group were to design an operating system to satisfy the following objectives: Simple and elegant Written in a high level language rather than assembly language Allow re-use of code Typical vendor operating systems of the time were extremely large and all written in assembly language. UNIX had a relatively small amount of code written in assembly language (this is called the kernel) and the remaining code for the operating system was written in a high level language called C. ...read more.

Systems based on this and later BSD releases provided a multi-vendor networking capability based on Ethernet networking. The networking support included, remote login, file transfer, electronic mail, and other important features. As UNIX was ported onto more and more different types of computer hardware the UNIX networking allowed many different types of systems to share and mutually use data. Networks consisting of many different systems could be used as a large distributed system. When SUN Microsystems added NFS (Network File System), this ability to share and mutually use data was significantly enhanced. UNIX POPULARITY At this point, the reader might be asking, "This document is designed for first time UNIX users. Why all of this discussion about programming and system programming?" The answer is because the document is using the history of UNIX to explain why UNIX is so popular. The application portability and system programming issues have caused many hardware and software vendors to choose UNIX. The effect of many vendors choosing UNIX is that there is a wide variety of UNIX systems available to users at attractive prices. There are three primary causes for UNIX's popularity (and none is user interface): Only a very small amount of code in UNIX is written in assembly language. This makes it relatively easy for a computer vendor to get UNIX running on their system. UNIX is nearly the unanimous choice of operating system for computer companies started since 1985. ...read more.

Once a user has learned UNIX, the skills can be used on many different systems. This ability for a user to work on many different makes of computer systems without re-training is called "user portability". Many users of other operating systems have converted to using UNIX because they felt that UNIX would be the "last" operating system they would have to learn. OPEN SYSTEMS There is a recent effort to define what is an "open system" in the international standards area. An open system is a system which allows application portability, system interoperability, and user portability between many different computer vendor hardware platforms. UNIX is a good example of the advantages to the user having an "open system". HISTORY SUMMARY From a simple beginning as a personal research project to an important role in the operating systems on a wide range of computer systems from desktop micros to the largest mainframes, UNIX has and will have a lot of impact. The strength of UNIX is its portability across multiple vendor hardware platforms, vendor independent networking, and the strength of its application programming interface. These benefits are so strong that the relative weak end-user interface has not slowed the adoption of UNIX. The end users are not the direct beneficiaries of the portability and the application program interface. However end-users have already seen the dramatic drop in the cost of computing when multiple vendors can provide the same operating system and software solutions. End users are currently making the choice for inexpensive and flexible computing rather than best user interface in choosing UNIX. ...read more.