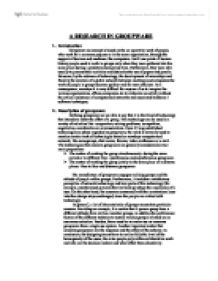 A research in groupware.

A RESEARCH IN GROUPWARE 1. Introduction Groupware as concept is based on the co-operative work of people, who work for a common purpose or in the same organisation, through the support of devices and machines like computers. Untill one point of human history people used to work in groups only when they were gathered into the same place during a predetermined period time. Furthermore, they were able usually to process their activities and duties by the use of papers and pencils. However, by the advance of technology, the development of microchips and fianally the creation of a global network between machines and computers the work of people in groups became quicker and far more efficient. As a consequence, nowdays it is very difficult for anyone of us to imagine the various organisations, offices,companies etc to elaborate an activity without the critical assistance of computerised networks and associated hardware / software techniques. 2. Description of groupware Defining groupware we are able to say that it is that kind of technology that intends to assist the effort of a group. This technology can be used in a variety of activities like: cooperation, solving problems, competition, negotiation, coordination or communication. Even if, long established technologies as phone regarded as groupware, the word is normally used to mention certain rank of technologies based on nowdays computerized network, like newsgroups, chat rooms, forums, video conference or e-mail. ...read more.

Generally, groupware software is imposiible to be successful unless there is no adoptivity of the target group. 3. Facilities offered towards groupware This section describes all the systems that are used for more than a few kinds of groupware. Additionally, in lots of situations, those software tools are able to be used alltogether and usually in collaboration with each other. Above it has been described the two generall and different techniques as concerns groupware: asynchronous and synchronous. Now, think about how those software tools are able to be incorporated. ASYNCHRONOUS GROUPWARE Email is the most familiar groupware function. Although, the fundamental technology is the sending and the receiving of a message between two peoples, still the most basic e-mail systems provide very interesting characteristics like file attachment, creating mailing lists, file forwarding. Hypertext is developed as a language to connect text documents enriched today with video, photos and hyperlinks and WWW(World Wide Web) being its obvious realization. Lots of hypertext schemes involve abilities for noticing which other person has called a sure page or link, or giving the opportunity noticing how frequently a page has been visited. When lots of people write and link documents, the system turn into groupwork, persistently involving and act in response to others work. ...read more.

However, ine my opinion it could have helped a lot a system of teleconference between the stockmarket offices and their customers in order to provide improvement to the communication and reduce the time to make decisions related to the realtime stockmarket stream. Besides an established video communication to the office might have helped into the meeting and decision making process, by connecting customers and stockbrokers or stockbrokers with the box offices in stockmarket in order to give orders of buying or selling stocks. From my point of view, another very useful and effective groupware application could be a decision support system. As it is written above, a system like that could have aid the colleagues of the business itself or the employees among various stockbroking offices into brainstorming, providing critique on ideas and perspectives, alternatives or even votin for a decision. To sum up an application like this should have enforce group activity sustain tools to systematize and rule their deparmental processes and dealings. In conclusion, it is worth to mention that all these groupware systems and techniques can save lot of time and travel cost and in addition to those applications many other systems as chat rooms, newsgroups and mailing list with a daily refresh on the stock prices of the customers, or even workflow systems can be added to the above. ...read more.