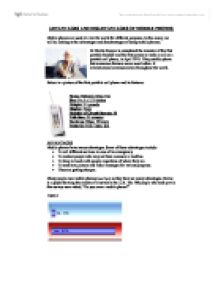 ADVANTAGES AND DISADVANTAGES OF MOBILE PHONES Mobile phones are used all over the world for different purposes. In this essay, we will be looking at the advantages and disadvantages of using mobile phones. Dr Martin Cooper is considered the inventor of the first portable handset and the first person to make a call on a portable cell phone, in April 1973. This portable phone had numerous features never seen before. It revolutionised communication throughout the world. Below is a picture of the first portable cell phone and its features: Name: Motorola Dyna-Tac Size: 9 x 5 x 1.75 inches Weight: 2.5 pounds Display: None Number of Circuit Boards: 30 Talk time: 35 minutes Recharge Time: 10 hours Features: Talk, listen, dial ADVANTAGES Mobile phones have many advantages. Some of these advantages include: * To call different services in case of an emergency. ...read more.

This may not be true. A survey that took place in Denmark, suggests that there are no health problems involved with using a mobile phones. The report quotes: "Mobiles phones are safe to use after all. Despite the scares, a survey of 420,000 Danish mobile users found no evidence that the devices increase cancer risk. It's the biggest and most comprehensive study yet, and according to the American Physical Society, its "rock-solid database make it difficult to take issue with the reports conclusion." The study, published in Today's Journal of the National Cancer Institute, says mobile users are no more likely than anyone else to suffer brain or nervous system cancers, leukaemia or salivary gland tumours." DISADVANTAGES As well as having advantages, mobile phones can also have disadvantages. These include: * Radiation through the brain. ...read more.

This piece of work contains some useful information on the advantages and disadvantages of mobile phones. The writer has picked out some good ideas of how they think the technology of mobiles has positive and negative impacts on people.

Some suggestions for improvement...

1. More examples need to be provided for the advantages and disadvantages. Most of the advantages seen by some users can be viewed as disadvantages by others. So for example, "Being contactable all the time provided there is a signal" could then be explained in terms of being a disadvantage and then as an advantage.
2. More information about the data collected by surveys - who were the audience, when was the data collected, how was the data collected and what is the best way to present the findings.
3. Balance - there is quite an emphasis on the health implications and this overrides the other points that have been made. If the other points were addressed in as much detail then this would be a very well rounded piece of work.
The quality of written communication is generally good although "phone" should really be "telephone" of be preceded by an apostrophe " 'phone".


As it stands this is a 3 star piece of work. It is too short to contain a real evaluation of the advantages and disadvantages of mobiles but it shows promise.