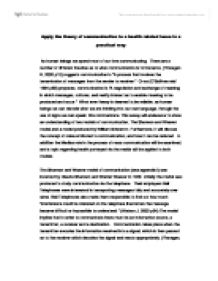 Apply the theory of communication to a health related issue in a practical way As human beings we spend most of our time communicating. There are a number of different theories as to what communication is for instance, (Finnegan R, 2002 p10) suggests communication is "A process that involves the transmission of messages from the sender to receiver." Or as (O'Sullivan etal 1994 p50) proposes, communication is "A negotiation and exchange of meaning in which messages, cultures, and reality interact as to enable meaning to be produced and occur." What ever theory is deemed to be reliable, as human beings we can decode what we are thinking into our own language, through the use of signs we can speak. We communicate. This essay will endeavour to show an understanding of two models of communication; The Shannon and Weaver model and a model produced by William Schramm. Furthermore, it will discuss the concept of noise attributed to communication, and how it can be reduced. In addition the Medias role in the process of mass communication will be examined, and a topic regarding health portrayed via the media will be applied to both models. The Shannon and Weaver model of communication (see appendix i) was invented by Claude Shannon and Warren Weaver in 1949. Initially the model was produced to study communication via the telephone. ...read more.

(Dimbleby, 1998) There have been a number of health related campaigns circulating the media of late. Consider for example, the 'Smoking Kills' campaign issued by the British Heart Foundation (www.bhf.org.uk) with the medium being the television and the application of the Shannon and Weaver model of communication. The British Heart Foundation would be the information source; the transmitter would act as the initial message 'Smoking Kills'. The receiver In this case would be the audience and the destination would be what sense the audience made of the message and what they did with this information. In theory, this would appear to be a very straightforward, predictable message that can be sent to a heterogeneous audience with constant repetition. However, a person who was already considering giving up smoking may require a great deal of help and support. The message can be repeated constantly, although, without any feedback from the audience the message would be redundant and the person thinking about giving up the habit would probably carry on. Therefore, there would seem to be a lot of interference (noise) to consider when employing a linear model to deliver a message in relation to a health campaign promoted via the media. Noise is a traditional concept associated with communication theory. Noise is what (Hartley J, 2002 p166) refers to as "The interference that is experienced during the transfer of information between a sender and a receiver." ...read more.

Thus eliminating some forms of noise by allowing for feedback to commence. Another method of eliminating forms of noise would be that of targeting selected audiences in relation to various topics of interest that would be beneficial to people of different, gender, age, and culture at different times of the day. For example, programmes or advertisements concerning children are usually broadcast during the morning or early evening when most children are at home. An advertisement concerning nappies would be televised during the day, as most mothers with child would be at home during the day. (Hartley, 2002) If the media were to target certain groupings, the messages they generate may achieve a greater understanding. To conclude, Shannon and weavers model of communication is an influential formulation to the theory of communication and would seem beneficial to the media as it delivers the message directly to its selected audience. However, as a model for health related campaigns the model would be redundant, it is typically linear and this can contribute to distortion of the messages perceived by the audience. William Schramms model, in theory would appear to be a more constructive technique of communicating via the media as there is continual feedback involved thus eliminating some forms of interference (Noise) and allowing the audience to perceive and understand the meaning of a certain health related message, and take an active response towards it. ...read more.