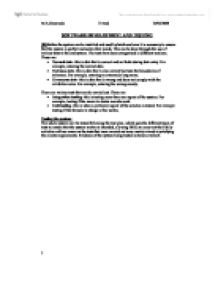 Before the system can be installed and used by hatch end cars it is necessary to ensure that the system is perfect and suites their needs. This can be done through the use of various tests to the end system

SOFTWARE DEVELOPMENT AND TESTING (iii)Before the system can be installed and used by hatch end cars it is necessary to ensure that the system is perfect and suites their needs. This can be done through the use of various tests to the end system. The tests have been categorised in different sections. These are: * Normal data- this is data that is correct and no faults during data entry. For example, entering the correct date. * Extreme data- this is data that is also correct but tests the boundaries of tolerance. For example, entering an extremely long name. * Erroneous data- this is data that is wrong and does not comply with the validation rules. For example, entering the wrong county. There are various tests that can be carried out. These are: * Integration testing- this is testing more than one aspect of the system. For example, testing if the macro to delete records work. * Unit testing- this is when a particular aspect of the solution is tested. For example testing if the formula to charge a fine works. Testing the system: The whole system will be tested following the test plan, which uses the different types of tests to ensure that the system works as intended, allowing HECs to carry out their daily activities with no errors as the tests that were carried out were mainly aimed at satisfying the clients requirements. Evidence of the system being tested is shown overleaf. Test No. Function To Be Tested Type of test Data Used Expected Results Pass/Fail Action Taken 1 All fields in Members form. Normal data and unit testing. James Brown,15/03/1985, 59,Drive Close, Pinner, Middlesex, HA5 ,5UB, 02084256944, 07985895468 Information provided about the customer is added to the system. Pass None needed. 2 Validation in the county field, located in the members form. Erroneous data and unit testing. Midlesex Error Message: The county has been wrongly entered. ...read more.

Error message 8- Entering the Car ID of a car in the Rentals form: Error message to be displayed- "The value entered is not valid. The car ID should be greater that 0 and has to be a car that exists." I tried to enter '0' in the Car ID and an error message appeared since 0 is not a Car ID. The error message tells the user that the Car ID has to be greater than 0 and has to be a car that exists within the system. Error message 9- Entering the Member ID of a member in the Rentals table: Error message to be displayed- "The value entered is not valid. The Member ID should be more than 0 and has to be a member that exists." I attempted to enter 0 in the Member ID field; the expected was displayed as shown above USER TESTING I had a meeting with Mr. Ghulraham discussing all the various functions that could be performed on the end system. I also demonstrated to him how the system is used. He wrote a letter to give me his feedback on the system, the following criticism were made: * It will be better to preview all reports before they are printed to ensure that the correct information is printed out. * Having another date display in the rentals screen will allow the employees to enter the dates much easier. The following comments were taking into consideration and the changes were made. Evidence of the change has been shown below: Previewing reports before they are printed: In the database window I clicked on forms and then clicked on Reports Menu. In the design view of the reports menu, I clicked on the command button and dragged it next to the Print Member Details button. A command button wizard then appeared where I chose the functions to preview the report and then selected the Member Details report. ...read more.