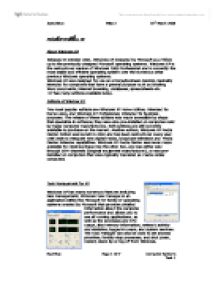 Microsoft Windows XP About Windows XP Released in October 2001, Windows XP designed by Microsoft as a follow up to the previously designed Microsoft operating systems. Windows XP is the restructured version of Windows 2000 Professional and is currently the most stable and efficient operating system over the numerous other previous Windows operating systems. Windows XP was designed for use on a home/business desktop, basically intended for computers that have a general purpose such as creating Word documents, internet browsing, databases, spreadsheets etc. XP has many editions available today. Editions of Window XP Two most popular editions are Windows XP Home Edition, intended for home users, and Windows XP Professional, intended for business purposes. The release of these editions was made accessible by shops that specialize in software; they were also pre-installed on computers sold by major computer manufacturers. Both editions are still currently available to purchase on the market. Another edition, Windows XP Media Center Edition was launch in 2002 and has been restructured every year until 2006 to integrate new digital media, broadcast television and Media Center Extender capabilities. Windows XP Media Center was never made available for retail purchase like the other two, and was either sold through OEM channels (Original equipment manufacturer), or was pre-installed on computers that were typically marketed as media center computers Task Management for XP Windows XP has many numerous features including task management; Windows Task Manager is an application ...read more.

and hosts many visual effects such as: * A translucent blue selection rectangle in Explorer * Drop shadows for icon labels on the desktop * Task-based sidebars in Explorer windows ("common tasks") * The ability to group the taskbar buttons of the windows of one application into one button * The ability to lock the taskbar and other toolbars to prevent accidental changes * The highlighting of recently added programs on the Start menu * Shadows under menus The interface, overall, is a clear and simple design, also easy to navigate. The interface for windows XP allows you to adjust your desktop to how you desire it. Windows XP includes a new Start menu to provide quick access to frequently used programs and common system areas like My Computer, Control Panel, and Search. This article describes the function of the different areas of the new Start menu. The left side of the Start menu contains the programs list, which is divided into two sections, the "pinned list" (at the top) and the Most Frequently Used (MFU) list. The two sections are separated by a line. The functions of these lists are as follows: The pinned list allows users to place shortcuts to programs and other items in the Start menu. It will be pre-populated with the user's default Web browser and e-mail program (these can be removed). ...read more.

File Management File management in Linux allows the user to access what is called the 'K file manager'. The K file manager is accessed by simply opening the K-start, proceeding on to system and file management. This is only available for the root user of Linux if ordinary users wish to access the file manager they simply click on the home folder shortcut button. Once the folder is open the person accessing K file Manager will be faced with a folder directory; these folders will allow you to manage the files that are currently stored in the system. User Interface Linux actually has a similar looking desktop to windows XP. There is a start menu known in Linux as the 'K start' menu which allows direct access to computer functions and applications such as multimedia and games for an example. Adjacent to the K start menu is a shortcut to applications known as K applications. With Linux the user is able to choose between four different desktop designs which are located next to the K applications on the K panel; these desktop are able to be customized personally to the user. A difference to windows is that Linux displays the running applications at the top of the page apposed to windows where it is located at the bottom. ?? ?? ?? ?? Joely Brice M&A 2 10th March 2008 Paul May Page 1 Of 7 Computer Systems Task 1 ...read more.