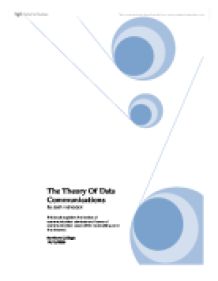 Because the bit was lost, the receipt machine will see that there are an odd number of bits. The machine was told to look for an even number of bits and because there is an odd number, the data is corrupt and therefore rejected. There is a fatal flaw to this system, if 2 bits are lost within transmission, then the recipient will not recognise it as an error and will accept the corrupt data. While this is very rare, it is still a flaw in the system. Cyclic Redundancy Check (CRC) Cyclic Redundancy Check is an error-detecting system. It performs a long division equation where the answer is discarded and the remainder becomes the result. The data is then transferred and the same equation is done at the other end, if the remainder of the equation isn't the same at the receipt, the data is corrupt and therefore rejected. Chapter 2 Describe communication protocols used and explain why they are important Hyper Text Transfer Protocol (HTTP) Hyper Text Transfer Protocol is a set of rules that dictate the distribution of information over the internet. Its use to retrieve hypertext documents, which are interlinked text documents, led to the development of the World Wide Web. HTTP is a request and response made by the client and server, the client being the end user and the server being the web site. A client that makes a HTTP request using a web browser is known as a User Agent. The server, which stores resources such as HTML files or images, is called the Origin Server. Between the User Agent and the Origin Server may be intermediaries such as proxies, tunnels and gateways. ...read more.

It also provides a signalling service which tells the sender that the destination had received the data has been successfully received. Transport Layer (TCP/IP) In TCP/IP, the Transport layer introduces two transport protocols, TCP and UDP. TCP implements reliable transportation of data whereas UDP doesn't. The reason this is, is because TCP required ACK (acknowledgement) to ensure that data is sent correctly and successfully. If an error is detected, the packet can be resent. UDP just broadcasts the data without any need for a reply from the destination therefore data transportation will be faster but will be less reliable as errors can occur. Comparing Transport for both Models Transport for both models is very similar as they both contain transfer protocols that required acknowledgement that data has been received by the destination. While this would be slower, this is more effective as data will always end up being sent correctly. Network Vs. Internet. Both OSI and TCP/IP support a connectionless network service. OSI's CLNP is practically identical to the Internet's IP. Both are best-effort-delivery protocols. They are virtually identical but the one major difference that sets them apart is that CLNP supports variable length addresses whereas IP supports fixed, 32-bit addresses. Data Link/Physical Vs. Subnet In OSI, the Data Link and Physical layers correspond directly to the Subnet layer of TCP/IP. Most of the time, the lower layers below the Network layer of TCP/IP are rarely discussed. During the creation of both OSI and TCP/IP, it was decided that the Network layer for TCP/IP would match the Data Link layer of OSI. ?? ?? ?? ?? Farnham College BTEC National Certificate IT P (Software Development) Unit 8: Communications Technology Josh Hancock Unit 8: Communication Technology Page 10 of 10 ...read more.