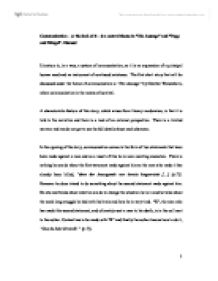 Communication - or the lack of it - is a central theme in "Die Aussage" and "Popp und Mingel". Discuss! Literature is, in a way, a system of communication, as it is an expression of a principal human need and an instrument of continued existence. The first short story that will be discussed under the theme of communication is "Die Aussage" by G�nther Weisenborn, where communication is the means of survival. A characteristic feature of this story, which arises from literary modernism, is that it is told in the narrative and there is a lack of an external perspective. There is a limited narrator and we do not get to see the full details about each character. In the opening of the story, communication comes in the form of two statements that have been made against a man and as a result of this he is now awaiting execution. There is nothing he can do about the first statement made against him as the man who made it has already been killed, "denn der Aussagende war bereits hingerrictet [...] (p.71). However he does intend to do something about the second statement made against him. He sits and thinks about what he can do to change the situation he is in and he talks about the week long struggle he had with his brain and how he is very tired. "K", the man who has made this second statement, and ultimately sent a man to his death, is in the cell next to the author. ...read more.

Communication in this story comes in many forms, the statements made against the prisoner, the Morse code between the two prisoners and "K's" notes that he hid in his cell. In the following short story that will be discussed, Popp und Mingel by Marie-Luise Kaschnitz, it's the lack of communication that plays a central part in it. The story is told in the 1st person narrative (a young boy). We see everything through the eyes of the boy and we also hear the words spoken to him by the adults through his perspective. The story begins when we meet this young boy, who comes home to an empty house and is all alone. However, this is something he appears to be used to, "ich m�sste das doch gew�hnt sein [...]" (p.59). So immediately we see that this is a boy who spends a lot of time at home alone, where there is not much communication between him and the other members of his family. He talks about the fact that he could have done anything and the family would not have objected. There is no parental guidance or voice of authority here, yet again showing the breakdown in communication. "[...] an der Ecke sei ein jugendfreier Film gelaufen, taschengeld h�tte ich ja genug, und sie h�tten auch nichts dagegen gehabt" (p.59). The boy goes on to tell us about the dark staircase he walks up and how it is representative of the time of year, perhaps this darkness echoes his feelings of fear of being alone in the house or his sadness about not having someone to welcome him home. ...read more.

This is when his feelings of loneliness get the better of him. He lights the cooker to heat up some food, and the flames are so high, bright and warm, in stark contrast to his family environment, which appears to be cold and hostile and he thinks that the flames are alive and that perhaps they can talk. [...] und die Flammen waren so hoch und lebendig und hell und warm, und ich habe mich gefreut und gedacht, dass man mit den Flammen vielleicht auch reden kann [...]4 The rubbish catches fire and the apartment goes on fire, luckily his father rescues him in time, but perhaps this was a way in which he tried to communicate to his family. He knew this would get their attention! The theme of communication is central to both of the short stories discussed above. Literature itself is a form of communication telling the readers something about the lives of the characters within the story. The narrative perspectives used in the stories are forms of communication in themselves because narration is the link between how the author writes his story and how he wants us as the readers to perceive it. Communication or lack of it is the main ideas used by Weisenborn and Kaschnitz to tell their story. In "Die Aussage" communication keeps one man alive and in Popp und Mingel it's the lack of communication between a boy and his parents that makes him realise that he accepts his family for who they are and that he is no longer a child, [...] dass man kein Kind Mehr ist. (p. ...read more.