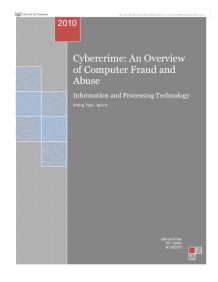 Table of Contents Cybercrime: An Overview of Computer Fraud and Abuse 3 What is Cybercrime? 3 New and emerging technologies and their impact on personal privacy protection 4 I-Phone 4 I-Pad 5 RFID Tagging 5 The Affect of Computer Crime on Society 7 What has been done by companies and governments to control the problem? 8 Penalties Imposed by Australian Law for Cybercrime 9 Weaknesses currently existing in Australian Cyber law 10 What proposed changes are being or should be suggested to overcome these loopholes 11 Chances of a computer criminal being caught and prosecuted 12 Reference List 13 Appendix 15 Cybercrime: An Overview of Computer Fraud and Abuse "New times bring new crimes. It's a story as old as humanity and as new as the Internet. First came cars, then car thieves followed. Telephones are followed by telephone fraud. Now we've got computers." (Anonymous1 Year Unknown) In the past decade technology has exponentially increased, and along with it computer crime. All new and emerging technologies are being affected by this transgression and this has been creating many problems for consumers, companies, agencies and the government. Companies and agencies have only now become conscious of the fact that their computers are prone to attack. In response to this, new security systems have been implemented and penalties for such an act increased. This report will briefly touch on technologies under threat, the impact of computer felonies on society, steps taken by companies and the government to control the problem, penalties associated with such crimes, loop holes in the justice system and chances of the perpetrators being caught. What is Cybercrime? Cyber crime is often defined as a crime committed online with the aid of a computer or networks. Typical activities of cyber crime can include the following: * Child pornography * Botnets * SPAM * Identity theft * Fake security software * Credit card fraud * DDoS Extortion * Click fraud * Cyber squatting * Blackhat SEO * Pump-and-dump stock schemes Of all these, botnets has grown exponentially over the last 4 years. ...read more.

This is an exceptionally detailed and well researched document which describes modern day computer misuse. The writer outlines in the introductory paragraphs of what the report is to discuss and also includes a section to define cybercrime along with the ...

This is an exceptionally detailed and well researched document which describes modern day computer misuse. The writer outlines in the introductory paragraphs of what the report is to discuss and also includes a section to define cybercrime along with the appropriate references, before continuing.
The main text begins in an orderly and structured fashion by first discussing the web technologies, applications and hardware/components prone to abuse and then applying this information by demonstrating its effects on society. The writer also notes the consequences and how law enforcement agencies and companies retaliate with new measures.

The writer provides numerous examples of the topics discussed and demonstrates a considerable level of analytical skills as evidenced through the references and citations included and drawing accurate assumptions and conclusions accordingly.
However, the writer provides a number of Wikipedia citations and should instead have provided what Wikipedia itself references (found towards the end of the page).

The style of writing is that of a formal report with few grammatical errors. One thing to note in particular would be personal opinions, rhetoric and straying away from the consistent style of writing, as an example, consider this extract: Ã¢â‚¬Å“This ignorance of both the court judges allows cybercriminals and civilians to think cyber felonies committed in Australia have somewhat little or no consequences. Can an increase be expected in cybercriminals? You tell me.Ã¢â‚¬Â
A short abstract would have been helpful, along with clear headers for an introduction and a conclusion. Overall, considering that this is an A-Level piece of work, the standard and effort involved is excellent.