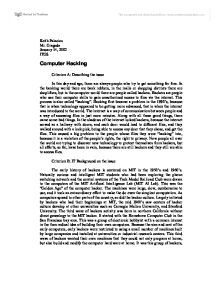 Keith Palacios Mr. Grageda January 14, 2002 ITGS Computer Hacking Criterion A: Describing the issue In this day and age, there are always people who try to get something for free. In the banking world there are bank robbers, in the malls or shopping districts there are shoplifters, but in the computer world there are people called hackers. Hackers are people who use their computer skills to gain unauthorized access to files via the internet. This process is also called "hacking". Hacking first became a problem in the 1990's, because that is when technology appeared to be getting more advanced, that is when the internet was introduced to the world. The internet is a way of communication between people and a way of accessing files in just mere minutes. Along with all these good things, there came some bad things. In the shadows of the internet lurked hackers, because the internet served as a hallway with doors, and each door would lead to different files, and they walked around with a lock pick, being able to access any door that they chose, and get the files. ...read more.

Largely initiated by hackers who had their beginnings at MIT, the mid 1960's saw centers of hacker culture develop at other universities such as Carnegie Mellon University, and Stanford University. The third wave of hackers activity was born in northern California without direct genealogy to the MIT hacker. It started with the Homebrew Computer Club in the San Francisco bay area. This was a group of electronic hobbyist with a common interest in the then radical idea of building their own computers. Because the size and cost of the early computers, early hackers were restricted to using a small number of machines built by large companies and installed at universities or industrial research centers. This third wave of hackers wanted their own machines that they could not only program at home, but also build and modify the computer hard ware at home. It was this group of hackers, which includes legendary figures such as Lee Felsenstein, Steve Dompier, Steve Wozniak, Steve Jobs, and Bill Gates, that formed the foundation for the entire personal computer industry of today. ...read more.

Another reason why people don't like hackers is because they are able to get into sites that require certain passwords that you legally can obtain by purchasing a membership. The people that own the site are being ripped off because someone is using their site and not paying for it, it is practically stealing. Criterion D: Solutions to the problem arising from the issue Ever since people realized that hackers are a threat to society, they have tried many different ways to try to stop them. Some software companies have developed new software and security systems to protect your computer and the files that are inside them. The software's are usually call firewalls. But for me the only way you can help protect the world from hackers, is to spread the word. You should tell people about the issue with hackers, so that when they find out about it, they will try to do what they can to stop them. Criterion E: Selection and using sources www.netsecurity.org/text/articles/history.html ...read more.