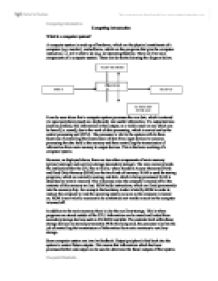 Computing Introduction What is a computer system? A computer system is made up of hardware, which are the physical constituents of a computer (e.g. monitor), and software, which are the programs that give the computer instruction, i.e. tell it what to do (e.g. an Operating System). There are five main components of a computer system. These can be shown by using the diagram below. It can be seen above that a computer system processes the raw data, which is entered via input peripherals (such as a keyboard), into useful information. Via output devices (such as printers), this information is then output, as a visible result or one which can be heard (i.e. sound), due to the work of data processing, which is carried out by the central processing unit (CPU). The processor is vital to the system with its three functions of controlling the transmission of data from input devices to memory, processing the data held in the memory and then controlling the transmission of information from main memory to output devices. ...read more.

Types of Computer There are seven main types of computer: Supercomputers These are the fastest and most expensive modern computer systems. They are usually not used in normal data processing, but for performing millions of intense mathematical calculations at the same time. For this reason, supercomputers have multiple processors. They are usually half the size of a classroom and cost around �5-7 million pounds. An example of how a supercomputer might be used is to forecast the weather and also it is used in NASA. This picture shows the Cray T932 series. It is capable of 56 billion calculations per second, which is matched by its price of �10,000,000. Mainframes These are very large computer systems, which usually have multiple processors or one very powerful single processor. There is typically a vast amount of memory, with many communication lines as well. Mainframes are often used as servers on the internet. They are also used in large businesses, such as Barclays, in order to host the very large database needed by the company. ...read more.

Games can even be played on these small machines. They are usually used by people who want something which can go around with them wherever they go. It is typical of a working person to have one of these. Embedded Computers Embedded computers are computer systems that are within a device and have a single dedicated job. The functions of these devices cannot be altered by the user as they are programmed by the manufacturer permanently in to the microprocessor. Embedded systems are found everywhere. For example a system controlling the temperature in a greenhouse, the working of a washing machine, dish washer, microwave and many more devices such as the digital watch. Hardware Devices INPUT STORAGE OUTPUT Keyboard ROM Monitor (VDU) Mouse RAM Printer (laser, ink-jet, dot matrix) Concept Keyboard Hard Disk Plotter Joystick Floppy Disk Speaker Tracker Ball CD-ROM Motor Touch Sensitive Pad CD-R Buzzer Light Pen CD-RW Actuator Touch Sensitive Pad Magnetic Tape Robots Graphics Digitiser DVD Light Emitting Diode (LED) Video Digitiser Zip Disk Liquid Crystal Display (LCD) Scanner Head-Mounted Display (HMD) Digital Camera Bar Code Reader Optical Mark Reader (OMR) Optical Character Reader (OCR) Magnetic Ink Character Reader (MICR) Magnetic Reader Sensor Microphone Computing Introduction Preeyesh Bhadresha ...read more.