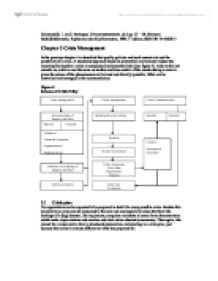 Groenendijk, J. en G. Boulogne, Crisiscommunicatie, ch.2 pp. 21 - 29, Samsom BedrijfsInformatie, Alphen aan den Rijn/Zaventem, 1994, 1e edition, ISBN 90-14-05028-3 Chapter 2 Crisis Management In the previous chapter it is described that quality policies and such cannot rule out the possibility of a crisis. A structured approach based on prevention can however reduce the recurring feeling that a crisis is unexpected and uncontrollable (see figure 4). And on this last remark, no crisis is ever the same as another and true control of the events during a crisis is given the nature of the phenomenon not (at least not directly) possible. What can be controlled and managed is the communication. Figure 4 Scheme of Crisis Policy 2.1 Crisis plan No organisation can be expected to be prepared in detail for every possible crisis. Besides this practically no crisis can be compared to the next one and especially crises that have the makings of a (big) disaster, like explosions, aeroplane accidents et cetera have characteristics which make improvisation and creative and alert action absolutely necessary. Then again, this cannot be a reason not to have a structured preparation, culminating in a crisis plan, just because the reality is always different to what you prepared for. The opposite is true; the unexpected nature of a crisis makes planning before the crisis happens necessary. Because when a crisis is at hand there is no time to make a plan. The ensuing improvisation will lead to a lack of accuracy, contradicting orders and in the worst case scenario to chaos and mistakes that makes the situation worse. In all likelihood there will not only be material damage but also massive immaterial damage: when a 'small accident' is poorly handled in terms of public relations, the 'dent' in the image of the organisation will be bigger than the immediate costs of the accident itself. There are also examples of companies that handled big disasters in such a manner that they're good name was not or hardly hurt at all. ...read more.

In this way the channels with other parts of the organisation that are responsible for the actual handling of the crisis is assured in a way that guarantees the required co-ordination. 2.3 Relations with external authorities Tuning in to and co-ordination with authorities become more important when a crisis exceeds the boundaries of ones own organisation. In case of a fire or an explosion several external authorities get in the picture: fire department, police, labour inspection and several municipal services. When there is trouble with a product you need to contact the commodity inspection department and given the nature of the product several other supervising authorities and departments. Therefore the crisis plan needs to contain an exact list of public bodies and emergency services which, in line with laws and regulations need to be informed. In addition to this - and at least as important - there need to be made clear agreements on informing civilians and consumers. Partly these agreements will result from the earlier mentioned disaster plans. When responsibilities and co-ordination in communication between the public services and the organisation itself are not laid down in advance, there is a good chance that the communication, most certainly in the early stages of the crisis, won't run smoothly. After the disaster with Cindu in Uithoorn in June 1992 the ministry of Foreign Affairs had to conclude that among other things the information of the public had been inadequate. Even the in many respects positive evaluation of the Bijlmer disaster points out several problems in the area of information, due to - among others things - the speedy dissemination of gossip. Even with less dramatic disaster like the Bijlmer communication in the early stages is influenced by several factors. This is the result of various kinds of feelings and reactions, for example: * concern for and uncertainty about the direct consequences; * concern for the possible effects in the long run; * fear for a possible worsening of the situation; * anger as a ...read more.

and e-mail addresses - regulations in case of officers are not answering calls - forms for recording data on the crisis/calamity 5. Crisis centre - place and arrangement concerning the central crisis centre - place and arrangement concerning the locally crisis centre - composition the crisis team (permanent team, replacements and additions to the team given the nature of the crisis) - tasks of crisis team members - agreements on communication with external organisations - regulations for personnel like doormen, receptionists and other employees - communication facilities (telephone, fax, computer et cetera) - back up facilities in case the regular equipment fails - arrangements press centres - facilities and communication equipment for the press 6. Procedures internal communication - family of victims - work council - personnel - other parts of the organisation - examples of internal information 7. Procedures external communication - residents in the area - authorities and emergency services - suppliers - distributors - consumers - banks, companies with similar activities et cetera - examples of external information 8. Procedures concerning press contacts - procedures on access of the media, including safety measures - procedures on spokespersons, centrally and locally, including the co-ordination - general do's and don'ts - press list (names, phone/fax numbers) - procedures on the reception of the press (central an local) - procedures on telephone contacts - procedures on press interviews - Q&A (Questions & answers, prepare for expected questions in advance - forms for internal reporting - log for the recording of press contacts (time, contact, information) - remarks on how press releases should be made - examples of press releases 9. After care - relatives of victims - thank you letters for personnel - thank you letters for emergency services - thank you letters for suppliers and distributors - communication consumers - examples of thank you advertisements - evaluation form on the handling of the crisis Appendices - contact list (names, addresses, telephone and fax numbers, including cell phones) - list of suppliers (telecommunications, catering etc.) - general information on your organisation - organogram - maps - glossary - safety regulations ...read more.