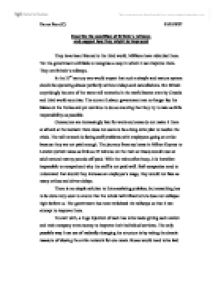 Describe the condition of Britain's railways and suggest how they might be improved They have been likened to the third world. Millions have ridiculed them. Yet the government still fails to recognise a way in which it can improve them. They are Britain's railways. In the 21st century one would expect that such a simple and mature system should be operating almost perfectly without delays and cancellations. But Britain surprisingly has one of the worst rail networks in the world beaten even by Croatia and third world countries. The current Labour government can no longer lay the blame on the Tories and yet continue to do so ensuring that they try to take as little responsibility as possible. ...read more.

Rail companies need to understand that should they increase an employee's wage, they would not face as many strikes and driver delays. There is no simple solution to this escalating problem, but something has to be done very soon to ensure that the whole rail infrastructure does not collapse right before us. The government has now reclaimed the railways so that it can attempt to improve them. To start with, a huge injection of cash has to be made giving each station and train company extra money to improve their individual services. The only possible way I can see of radically changing the structure is by taking the drastic measure of closing the entire network for one week. ...read more.

Although this would cause chaos, the government would insist and promise the country that they would notice the significant improvement after the closure. The whole operation would have to be planned thoroughly beforehand to ensure that the closure was kept to the designated week and a large number of workers would need to be employed so that the work was carried our efficiently and accurately. I believe that once the new tracks have been laid and the system returns to normal, the government need to continually upgrade them and invest in new technologies to make British railways the best in the Western world. It may be necessary, if the idea does not work, to close the network again for further upgrades or perhaps focus on each line individually. Although the government would, without a doubt, face criticism over this, they would also receive praise after the whole operation is over. Darren Burn (C) 01/05/2007 ...read more.