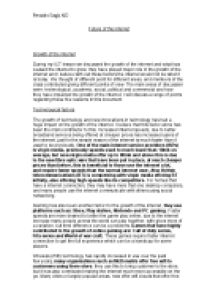 Describe the future of the Internet.

There are many website that school may subscribe to access these websites they include such websites as www.mymaths.co.uk. The use of blogs is used for educational purposes to evidence students work for the examiner/moderator. And example of the is www.blogger.com, many UK universities and other universities in developed countries allow students to use free access to internet by provided wifi and computers connect to the internet all over campus. This enables students access the internet when required for there studies and can be done at almost any time. With in the educational structure there is the use of forums that allow students to connect with other and ask questions about further educational and allow the students to share/work projects together letting them build on collaborative working programmes enhancing the students educational experience. Education is a biog reason for the growth and use of the internet as it has provided many with information they may not have been able to access previous it pushes may people around the world to use the internet to educate themselves where they could not before and has been sued to do research and studies to do work and this has been done by suing a vast amount resources and knowledge that can be accessed using the internet. The use of technology within education has increased the number of people accessing these website for these purposes. Social impact on the internet When the internet first came about, people used it for only when required and not much for personal benefits, they were not as educated as many people are today, as it was a new form of technology at the time. With the introduction of email people used the internet much more and began to communicate more using emails rather than using letters as they were free, they also became popular with in the average home in the 1990s and technology was also devolving as the internet started to become a part of the household, in the past few years ...read more.

like other to joining or vote for them, we have seen this as many have released video clips, for example from David Cameron showing that he is a normal person as we are. The main party in power are using these sorts of media to there advantage and make an image that is in touch with the public. The increased use of the internet has also enabled pornographic images and videos, and this is obviously a politic concern, this may be easily accessible to younger audience, an example of this would be Gary glitter was convicted of child pornography in Thailand 1997. this shows that the growth of the internet has made these types of material more accessible via the internet. Although the websites must ensure the users are only 18 and above this is not very secure as you must only click one box the access the website. In the year 2000 the children?s internet protection act was introduced requiring schools and libraries to block pornography websites; the software filters all websites and images with 8% of flesh showing. There are many other controversial topics such as racism is discussed over the internet, this can have both positive and negative effects depending on who enters the or sees the form, because anyone can see this information, this can be a controversial matter. For example, when the footballer Fabrice collapsed on the field, someone posted on a social networking website, offensive language towards the player. This person was later jailed for this. With the rise an growth on the internet politics are affecting the use of the internet by the many laws that are now in place to protect peoples information, how ever these laws are difficult to enforce as it is not possible as the internet is to large to fully monitor, there is no governing body for the internet, at the current time, as this is something that many have been calling for as it needs to be regulated strictly some believe. ...read more.