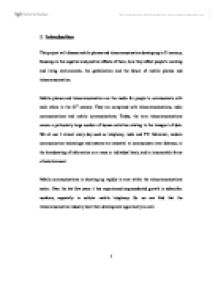 1 Introduction This project will discuss mobile phones and telecommunication developing in 21 century, focusing on the negative and positive effects of them, how they affect people's working and living environments, the globalisation and the future of mobile phones and telecommunication. Mobile phones and telecommunication are the media for people to communicate with each others in the 21st century. They are comprised with telecommunications, radio communications and mobile communications. Today, the term telecommunications covers a particularly large number of human activities relating to the transport of data. We all use it almost every day such as telephony, radio and TV. Moreover, modern communication technology and systems are essential to communicate over distance, to the broadcasting of information on a mass or individual basis, and to innumerable forms of entertainment. Mobile communications is shooting up rapidly in area within the telecommunications sector. Over the last few years it has experienced unprecedented growth in subscriber numbers, especially in cellular mobile telephony. So we can find that the telecommunication industry have their development opportunity as well. Tomorrow's communicator will integrate the features of telephone, agenda and organiser, combined with PC functions. This will include videophone and fax features, as well as the possibility to "plug" into office or private computers. They will integrate multimedia and telecommunications applications. Moreover, the mobile phones functions would also have their development opportunity for example; the 3G, 4G, Bluetooth, I-mode, Wap, Wireless and packet switching are the new fantastic functions in this 21st century. 2 Mobile Phones and Telecommunication 2.1 History Historically, telephone comes from the Greek word tele, meaning from afar and phone, meaning voice or voiced sound. Generally, a telephone is any device which conveys sound over a distance. A string telephone, a megaphone, or a speaking tube might be considered telephonic instruments. In 1973 the Martin Cooper makes the first call from a Motorola mobile phone and he is now head of California-based firm ArrayComm. ...read more.

It is harmful to people in the technology century. Nevertheless, mobile phones actually can give us a considerable number of advantages. But we cannot escape a number of negative effects of mobile phones and should be taken it seriously. The discussion as to whether the mobile phones are a blessing or a curse arouses most people's interests. 3 Effect of People's Working and Living Environment 3.1 The Working Environment With the development of society, telecommunication is exceedingly significant for everyone especially for working environment. Basically telecommunication are comprised with telephone, fax, telegraph and e-mail, it can give us more opportunities to communicate with the others in the 21st century. In spite of they bring us more convenience, efficiency and clearly information from the machine, as the same time, some of the technicians problems come out with us as well. We can recognize that a considerable number of the problems when using each kind of telecommunication machine seem obvious. Data and information are very important in each business aspect environment. Safety, accuracy, clears and efficiency data and information are the seriously technicians problems for each aspect of business environment in this 21st century. Although the telecommunication is excellent today, we need to avoid the data and information transfer to the hacker or other as well. Recently the phenomenon has aroused wide concern. Some people are in alarm those problems. No doubt, this is a global problem for each aspect of business environment especially for the developing countries. 3 Effect of People's Working and Living Environment 3.2 Family and Teenagers We have just crossed the threshold of the 21st century and the curtain of the new millennium is slowly rising. With the steady growth in the country's economy as well as the people's living standard, the rhythm of people's living is speeding up and a lot of changes have taken place in their daily life. Mobile phones and telecommunication are rapidly gaining its popularity around the world. ...read more.

5 Conclusion Along with the rapid development of the society, remarkable changes have taken place in telecommunication industry. In the 21st century, yet when it comes to mobile phones and telecommunication, people from different backgrounds hold different attitudes. However, there is a good side and a bad side to everything. Mobile phones and telecommunication are no exception. Undoubtedly, conveniences, efficiency, creative and innovative are the advantage for the development of the telecommunication industry. Bluetooth, I-mode, Wap, Wireless, packet switching, 3G and 4G are the modern technology for us. Notwithstanding how well of the telecommunication, they must have their disadvantages. In fact, brain cancer, car accidents and street crimes are the absolute bad influence for us. That is a very important thing for people nowadays either the advantages or the disadvantages. Indeed, not only the World Health Organisation should establish the regulation for the mobile phones user to avoid the car accidents and enhance the supervision of mobile phones manufacturers but also the International Police Association should establish guideline to crack down on street crimes such as advice mobile phones users don't use phones when they are walking in the street. It goes without saying that mobile phones and telecommunication user are continuously increased. At the same time, a number of effects must appear for people's communication. For company, the security of transmitted data and information are the serious problem for them. In fact, the companies must have an extremely security system to protect their data and ensure the data send to the other under the secure environment. On the other hand, some people argue that teenagers using mobile phones during the lesson should be allowed. Actually, this question is very controversial one in this generation. Finally, mobile phones and telecommunication industry will have an excellent development in the 21st century especially for those developing countries. From what has been discussed above, we know that the Hong Kong ISP PCCW is the first telecommunication company provide NETVIGATOR Inflight service for Cathay Pacific Airways. Obviously, a considerable of fantastic new technology products will bring us more entertaining life and energetic working environment. 1 1111171751 ...read more.