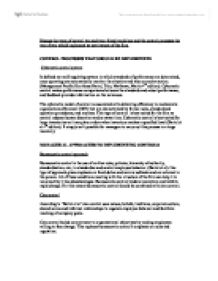 Discuss the types of control you and your friend would use and the control processes the two of you would implement as new owners of the firm.

Discuss the types of control you and your friend would use and the control processes the two of you would implement as new owners of the firm. CONTROL PROCESSES THAT SHOULD BE IMPLEMENTED Cybernetic control system Is defined as a self regulating system in which standards of performance are determined, once operating can automatically monitor the situation and take corrective action. (Management Pacific Rim focus Bartol, Tein, Matthews, Martin 4th edition). Cybernetic control makes performance comparisons between the standards and actual performance, and feedback provides information on the variances. The cybernetic model of control is associated with delivering efficiency in mechanistic organizations (Brownell 1987) that are characterized by formal rules, standardized operation procedures, and routines. ...read more.

Bureaucratic control hinders innovation and inhibits rapid change. For this reason bureaucratic control should be combined with clan control. Clan control According to 'Bartol et al' clan control uses values, beliefs, traditions, corporate culture, shared norms and informal relationships to regulate employee behavior and facilitate reaching of company goals. Clan control builds commitment to organizational objectives by making employees willing to face change. This replaces bureaucratic control's emphasis on rules and regulation. For this reason clan control is needed with firms such as this with routine jobs. So in future changes can be made such carrying different stock or more flexible duties for everyone. This will also reduce labor costs as a person can do more then one task. ...read more.

EFFECTIVE CONTROL SYSTEM Effective control systems have these common characteristics (Merchant 1985; Stoner & Wankel 1986). These include future oriented, acceptable to organization members, realistic, flexible and many more. To asses whether a control system implemented is effective or not it should feature some/most or all of these characteristics. Future oriented A control system that is effective in this regard will identify to mangers future development opportunities as well as showing where future corrective action is needed (Bartol et al 4th edition) Realistic Employees need to see the control system as being realistic in what to achieve or otherwise they won't follow the control. Acceptable to organization members Effective control systems are ones that employees accept and that focus on issues consistent with organizational goals. Goals that give helpful data and when collected can be used for improvement in employee performance (McColl 2003b) ...read more.