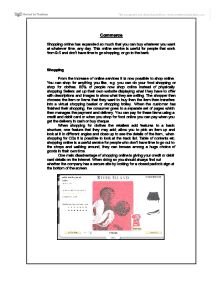 Commerce Shopping online has expanded so much that you can buy whatever you want at whatever time, any day. This online service is useful for people that work from 9-5 and don't have time to go shopping, or go to the bank. Shopping From the increase of online services it is now possible to shop online. You can shop for anything you like, e.g. you can do your food shopping or shop for clothes. 85% of people now shop online instead of physically shopping Sellers set up their own website displaying what they have to offer with descriptions and images to show what they are selling. The shopper then chooses the item or items that they want to buy then the item then transfers into a virtual shopping basket or shopping trolley. When the customer has finished their shopping, the consumer goes to a separate set of pages which then manages the payment and delivery. You can pay for these items using a credit and debit card or when you shop for food online you can pay when you get the delivery in cash or buy cheque. When shopping for clothes the retailers add features to a basic structure, one feature that they may add; allow you to pick an item up ...read more.

Internet auction sites are for people you want to sell things or buy things cheaper than what they would pay for things in the shops; however some items on internet auction sites are rare and valuable. The purpose of eBay is to be able to sell and purchase things online and be able to pay cheaper prices for the items than you would in the shops. The main target audience is the younger generation. The Auction process works like you have to outbid people for the item that you want most items on eBay are quite cheap however the postage and packaging is where the main money is at. Then once you have won that item you have to either pay for it via pay pal or if it's a pickup you pay the seller in cash in hand when you pick up that item. Sometimes you do not receive the items for some reason or another if you do not receive the product you can claim your money back through pay pal. Most auction site allow you to view the product up close etc.There are several different types are auctioning: * Auction-style listings allow the seller to offer one or more items for sale for a specified number of days. ...read more.

To access your account online is a quck and easy process, all you need is your sort code, account number and debit card (if you have one) This is an example of the form you fill out on the internet to bank online. Advantages of e commerce * it is quick and easy shopping without having to go to the shops * helpful for working people that don't have time to shop * saving the enviroment, because you don't need to use your car disadvantages of e commerce * you have to pay extra for delivery charge * you have to make sure that the website is secure, so that your card details cannot be seen by other people. * When auctioning online you are not garenteed to receive what you have ordered. Overview of commerce In the future I think that the e commercal business is going to expand. Every shop is going to have its own site. Less and less people are going to be going to the shops and do their shopping. More items are going to be shown for you to buy. However as the e-commercial industry expands more credit card fauds are going to be occuring. ...read more.

In summary, the report is quite basic. The report does describe the different types of eCommerce websites, and has a limited range of examples. However the report is lacking in-depth understanding. The report states that sellers set-up a website to ...

In summary, the report is quite basic. The report does describe the different types of eCommerce websites, and has a limited range of examples. However the report is lacking in-depth understanding. The report states that sellers set-up a website to sell their products. However this isn't always the case. Some sellers may sell their products though websites such as eBay, Amazon Marketplace and other third party websites. The report states that eBay is aimed at the younger generation. Although the student hasn't explained why this is. I remember that within the Transformers film, eBay was mentioned. The film was aimed at the young adult market, and thus eBay would be placing adverts which are targeted towards their target audience.

The report states that a person can order their clothes/food on-line, however these two types of products are rarely purchased on-line. The report could include 'Clothes/Food are an exception, as the majority of consumer's purchase these products in-store, as there try the clothes on or there may need to touch/view the product first before buying. On-line sales are increasing, however this is still a small % of the market'. The report states that a number of consumer's don't have time to walk into a number of stores. Although why is that? Consumer's often have work from around 8AM to 6PM. This is the opening/closing times of the majority of stores, and the consumer's are often at work then the stores are open. Thus, there don't have the free time to shop in-store.

The report states that websites are secure if a SSL padlock sign is at the bottom of the web page. This is in-correct, as this can be found at the top of the browser. In addition, the report could include a screenshot of a website, showing the padlock symbol within the internet browser. The layout of the report is quite poor, as it's quite unclear. At one stage of the report, the reports jumps form River Island to Tesco, and this is quite confusing.