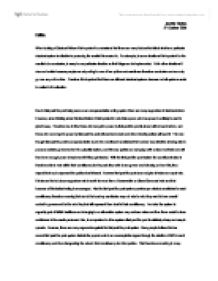 Politics: When looking at Electoral Reform it is important to understand that there are many factors that effect whether a particular electoral system is effective in producing the results it is needed to. For example, in some situations it is important for the results to be conclusive, to sway in one particular direction so that things can be implemented. Yet in other situations it does not matter because people are only voting for one of two options and results are therefore conclusive and can only go one way or the other. Therefore it is important that there are different electoral systems because not all systems would be suited to the situation. Due to first past the post being seen as an unrepresentative voting system there are many supporters of electoral reform. However, when thinking about Electoral Reform it is important to note that anyone who has power is unlikely to want to give it away. Therefore due to this, those who can get to power by first past the post (Labour) will not want reform, and those who cannot get to power by first past the post (Liberal-democrats and other minority parties) will want it. Yet even though first past the post is unrepresentative due to the constituent candidates it is however very effective at being able to produce decisive governments. ...read more.

There are several alternative voting systems, firstly there is the Alternative Vote (AV.) This system is used to elect the Australian House of Representatives and is a majority system. In this system voters return one candidate to represent each constituency. Voters place all candidates in order of preference and if any candidate receives 50% or more of the vote they are elected with an overall majority. This system would be an ideal electoral system for electing the British Government as it produces decisive results just as our current first past the post system delivers yet; it also wastes fewer votes and means that smaller parties therefore have a better chance at being elected. The supplementary vote (SV) is also an option; it was used to elect London's first democratic mayor. In this system the voters have two choices, first and second. If a candidate receives 50% of first place votes they are automatically elected. This system ensures maximum support for winner. This suggests that it would be suitable for the British general election as it ensures majority support and this is necessary for British government. The second Ballot system is another voting system that could be used in Britain and is currently it is used in France. Here voters choose one candidate and if one candidate receives over 50% of the vote or more they are elected. ...read more.

However it would also stop constituency representation and this would mean that there was no particular person to stand up and represent the opinions of each focused regions beliefs and best interests. If electoral reform were to happen, the new system needs to satisfy various important factors; Firstly, the system should have a bias in favour of a single party government without allowing this to result from considerably fewer than half the votes cast and there should be a threshold (of perhaps 5%) to exclude very small parties but not those 'based on a feeling of national identity' In addition this system should give the main parties representation in the areas where they had significant but not majority support and therefore the link between the MP and his/her constituency should be maintained. Also is order to cause the least confusion the new system should be simple and involve as few changes as possible. All these points suggest that the new system should provide the individual voter with more power. Looking at all these points, it was decided that the single transferable vote (STV) and Additional member system (AMS) satisfied almost all of these conditions and therefore if the British electoral system was to be reformed it would be replaced these systems. This is backed up by the fact that according the Lord Jenkins' independent commission on Electoral reform the STV vote came out on top with 14 points in total out of a maximum of 20 where each system was reviewed. Jennifer Clutten 5th October 2004 ...read more.