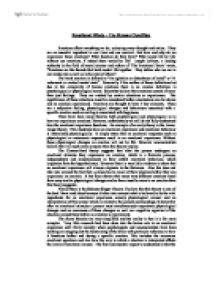 Emotional Minds - The Human Condition Emotions affect everything we do, colouring every thought and action. They are an essential ingredient to our lives and our survival. But how and why do we experience these emotions? What function do they have? What would life be like without our emotions, if indeed there would be life! Joseph LeDoux, a leading authority in the field of neural science and author of 'The Emotional Brain' wrote, "Emotions are the threads that hold mental life together. They define who we are in our minds eye as well as in the eyes of others". The word emotion is defined as "An agitation or disturbance of mind" or "A vehement or excited mental state". Personally I like neither of these definitions but due to the complexity of human emotions there is no concise definition in psychological or physiological terms. Scientists believe that emotions consist of more than just feelings. They are evoked by certain situations or experiences. The significance of these situations must be considered before conclusions can be drawn and an emotion experienced. Emotions are thought to have 3 key elements. These are a subjective feeling, physiological changes and behaviours associated with a specific emotion such as smiling is associated with happiness. There have been many theories both psychological and physiological as to how we experience emotions. However, unfortunately we still do not fully understand how the emotional experience functions. An example of an early theory is the James-Lange theory. ...read more.

However the area known as the limbic system is no longer easy to define. The mistake that MacLean made was to package all emotions into one system because as I said above all the separate emotions need to be considered separately. One of MacLean's arguments in favour of his limbic system was one of evolution and that emotions exist because they are essential to our survival. He believed that all emotions evolved in the same way at the same rate as if they were one thing. He never considered that in fact as different emotions are involved in different survival functions, each will involve a different brain system and so will have evolved for different reasons. This is the essence of the most modern scientific studies. It is true that all emotions have their own separate systems, which all need to be mapped. It is still believed that the cerebral cortex and the hypothalamus are at the centre of these emotions but each network is different. What function do these convoluted emotions have? I believe that there are two reasons why emotions exist. The first and probably most important reason published by Darwin. He believed that emotional expressions were innate and so do not have to be learnt. He believed that as they were inherited from our ancestors and had survived the process of evolution that they must be essential to our survival. Many experiments have been conducted to prove this theory. Ekman and Friesen showed that isolated New Guinea tribesman could recognise western facial expressions illustrating emotions just as they too could make facial expressions to illustrate emotions themselves. ...read more.

This also leads to the formation of our modern legal system, which is based on our moral beliefs. Therefore we often prosecute people who induce strong negative emotions in others and what they have done is considered to be against the law. Of course this is a huge simplification but I believe that it illustrates why society and the individual require emotions. To conclude, it is clear that emotions are a very complex issue but are a central part of both our survival and our social lives. No matter how complex the psychological and physiological theories become, the simple truth is that without emotions life would not exist, as we know it anyway. It seems that scientists have now come to the conclusion that emotions must be mapped and studied as separate functions instead of one. In addition they have stated that the majority of an emotional experience occurs subconsciously and that in fact how we behave and what we feel is only the tip of the iceberg. I believe that this has given me a new outlook on the functioning of an emotional experience. Finally and I believe most facinating is the role of evolution in the development of emotions and from this our moral code. It is clear that emotions have evolved through time to reach the emotional pinicle at which humans stand. What the future holds is speculation but I believe that it will be facinating to follow. As Artificial intelligence develops to levels and emotions are mapped through our nervous system and brain, who knows, maybe computers wil be able to feel pleasure, pain, anger and joy. ...read more.