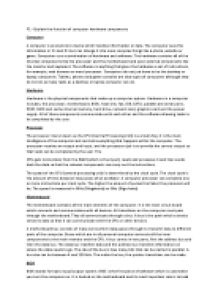 Transfer-Encoding: chunked ﻿P1 - Explain the function of computer hardware components Computer A computer is an electronic device which handles information or data. The computer sees this information in 1?s and 0?s but can change it into more complex things like a photo, website or game. Computers use a combination of hardware and software. The hardware contains all of the internal components like the processor and the motherboard and even external components like the monitor and keyboard. The software is anything that gives the hardware a set of instructions, for example, web browser or word processor. Computers do not just have to be the desktop or laptop computers. Tablets, phones and game consoles are also types of computers although they do not do as many tasks as a desktop or laptop computer can do. Hardware Hardware is the physical components that make up a computer system. Hardware in a computer includes, the processor, motherboard, BIOS, heat sink, fan, IDE, SATA, parallel and serial ports, ROM, RAM and cache internal memory, hard drive, network card, graphics card and the power supply. All of these components communicate with each other and the software allowing tasks to be completed by the user. Processor The processor more known as the CPU (Central Processing Unit) ...read more.

Each IDE ribbon, attached to either controllers can support two drives. To know which data relates to which drive it is identified as the master or slave drive. The master drive deals with all the traffic on the IDE cable. Its controllers recollects its own data and passes on data to the slave drive. The slave drive only sees the data that is passed on from the master drive. SATA SATA stands for serial advanced technology attachment. This is a computer bus interface for connecting host bus adapters to mass storage devices such as hard disk drives and optical drives. It transfers data between the motherboard and other devices. Ports Parallel and serial ports are types of data buses. A serial port is used to connect a serial device to the computer (for example, a modem and some computer mouse?s) and capable of transmitting one bit at a time. A parallel port is used to connect a parallel device to a computer (for instance, a printer) they can carry more data because they don?t need to be split using a single bus file. Parallel sends and receives and serial just sends data, and it doesn?t receive. ROM ROM stands for read-only memory. It is a type of storage used in computers and other electronic devices. ...read more.

In addition, unlike floppy disks they are immune to magnetic interference. USB flash drives use the USB mass storage standard which is supported by operating systems like OS X, windows and other systems alike. A flash drive has a small printed circuit board which holds the circuit?s elements and a USB connector which is protected with a metal, plastic or rubber case. If the USB gets too hot or too cold it could affect many things. For example, corruption of data, if the USB gets overly hot, data which is stored on the USB will be corrupted. Additionally, when the microscopic connections inside a flash drive get too hot or too cold it may have trouble passing the information to or from the drive, therefore there could be a slow response time. Furthermore, the computer may not be able to access the drive or it can be listed and disappears shortly after. Floppy and Disk Drives A floppy disk is a small removable storage sealed in a rectangle plastic carrier which is lined with fabric which removes dust particles. They were used to distribute software, transfer data, and create backups however, they are not used much today due to better quality storage devices like USB?s. Because a floppy disk is made of thin plastic they can be broken very easily. In addition, putting the floppy disk on a magnetic field may corrupt the data which is already stored on the disk ...read more.