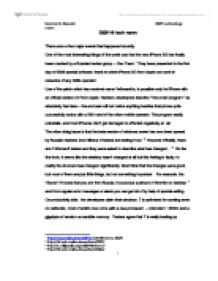 2009 hi-tech news There were a few major events that happened recently. One of the most interesting things of the week was that the new iPhone 3G has finally been cracked by a Russian hacker group - Dev Team.1 They have presented to the first day of 2009 special software, thank to which iPhone 3G from Apple can work in networks of any GSM-operator. Use of the patch which has received name Yellowsn0w, is possible only for iPhone with an official version 2.2 from Apple. Hackers-developers describe " the small program " as absolutely harmless - the end user will not notice anything besides that phone quite successfully works with a SIM-card of the other mobile operator. ...read more.

On productivity side, the developers claim that windows 7 is optimized for working even on netbooks, most of which now come with a new processor - Intel Atom 1.6GHz and a gigabyte of random accessible memory. Testers agree that 7 is really loading up quicker and works better in terms of speed. If installed on SSD drive, it overruns Vista by miles in using processor. A little on capability, unfortunately, some applications, like in Vista's beta version, are not supported by new operating system.5 Even worse is that it applies to many antiviruses, such as Panda and McAfee Total Protection and the testers also state that Dr Web 5 has completely crashed the system to the blue death screen and did not allow to uninstall itself. ...read more.

the Legget&Platt, which proposes even more interesting method - eCoupled, the base and the device are provided with little copper strings and the energy is transmitted via magnetic field.8 The producers are sure that their products are safe, however persuade the consumer in that they won't be hit an electric charge and that they will be still alive after using any of these will not be as easy as there are already many rumors about what usually happens in such experiments.9 Even though the year has only just started, there is a significant development in communicational technology and what is described here is only a few big drops from a sea, so many things are being developed at any one moment, it is impossible to estimate the impact on it to is and our planet in near future. ...read more.