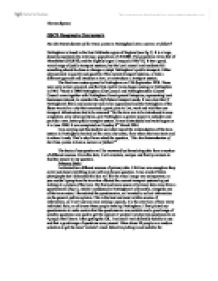 GSCE Geography Coursework Has the Reintroduction of the Tram system in Nottingham been a success or failure? Nottingham is based in the East Midlands region of England (see fig.1). It is a large, densely populated city, totalling a population of 266,988. The population rivals that of Manchester (392,819), and the slightly larger Liverpool (439,473). It has a good, varied range of public transport systems, but the local council and residents felt something should be done to change or adapt Nottingham's public transport. Either advancement in quality and quantity of the current transport systems, or take a different approach and introduce a new, or reintroduce a, transport system. The first tram routes opened in Nottingham on 17th September 1878. These were only animal powered, and the first electric trams began running in Nottingham in 1901. "Back in 1988 Nottingham City Council and Nottinghamshire County Council came together with Nottingham Development Enterprise, representing local businesses interest, to consider the city's future transport needs. It was clear that if Nottingham's fabric and economy were to be regenerated and the Nottingham of the future was to be a city that remained a great place to live, work and visit then our transport infrastructure had to be renewed." So the tram was to be introduced to ease congestion, slow down pollution, give Nottingham a greater appeal to outsiders and provide a new, better public transport system. It was reintroduced and work began on it in June 2000. It was completed on Tuesday 9th March 2004. I am carrying out this study to see what impact the reintroduction of the tram system in Nottingham has had on the main city centre, from where the tram starts and to where it ends. That's why I have asked the question, "Has the Reintroduction of the Tram system in been a success or failure?" The basis of my question will be answered by formulating data from a number of different sources. ...read more.

With the tram going on only one route, the majority of Nottingham's public aren't going to use it, as it just doesn't go near their residential setting. Only people that actually live near the route might use it, and that is a very small minority of Nottingham's populace. The tram really can't compete with the bus when positioning is the main issue. The bus travels everywhere in Nottingham, and is mostly convenient for everyone. The tram just can't rival that with only one route, and when its not popular, other routes won't be built. As it can't get popular as the main downside is positioning, it really isn't going to be a big success. Timing was the other main downside about the tram system, as it appears to be quite regularly late. It's only give-or-take a few minutes, but that's a long time in terms of public transport. People want transport on the dot, and being late regularly just isn't acceptable. The NET had planned for the trams to arrive as close to the proposed time as possible. This would enhance the popularity of the tram and make people want to use the tram instead of the bus. Buses are usually not exactly on time, and when people are in a hurry, they want reliability. This was where the tram was supposed to come in, but according to my questionnaire results it doesn't seem like it met its proposed requirements. The next question of my questionnaire cannot be graphed, as it required the public to write their answer rather than just circle an answer. I obviously got a lot of different results for this question, as most people write different things. The most popular answers were as follows: How could the trams be improved? Need to be closer to residential areas. Expand the network to cover south side of city. Have more trams running. ...read more.

I have found out that the populace of Nottingham just aren't happy with one tram route. People want it expanding; they want the tram, just on a much bigger scale that what it is at the moment. It needs to travel in all directions, especially covering the south side of the city, and to dense residential areas. Overall to conclude the information, the tram system in Nottingham just hasn't been a success. People aren't satisfied with only one route, and the Council aren't going to make more until people are satisfied with the first. 'The Big Wheel' scheme is the way forwards for Nottingham. I feel this will cut down on traffic congestion and pollution by the amount that it needs to be. A tram route alone isn't going to change anything, especially as only a very small minority of people actually use it. All in all, it hasn't been a great success. I understand that my coursework is only a very small part of a much bigger picture. My predictions and answers could have been different if I had researched a different area of Nottingham. Overall, I think my investigation went pretty well. I didn't really encounter any problems, although when I was handing out my questionnaires, I found it hard to persuade people to fill them in as a lot of people didn't have the time or patience to do so. If I were to change anything in my investigation, I would have used more primary data. One questionnaire just isn't sufficient enough for my investigation. I would have also investigated another city, which has recently introduced trams in great detail, to see if that city encountered the same problems and compare that to Nottingham. I would also research heavily into the aims of 'The Big Wheel', and see if the tram route will stage the rest of the integrated transport system for Nottingham. Appendix Resources from: www.nottinghamexpresstransit.com Resources from: www.thetram.net Resources from: www.nottinghamcitygov.com Resources from: www.google.co.uk Resources from: leaflets published by NET Thomas Spence ...read more.