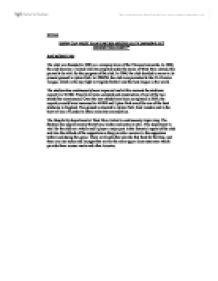 TITLE "HOW CAN WEST HAM UNITED HOSPITALITY IMPROVE ITS COMMUNICATION?" BACKGROUND The club was founded in 1895 as a company team of the Thames Ironworks. In 1900, the club became a limited liability company under the name of West Ham United, this proved to be vital for the progress of the club. In 1904, the club decided to move to its present ground in Upton Park. In 1992/93, the club was promoted to the FA Premier League, which is the top flight in English football and the best league in the world. The stadium has continuously been improved and at this moment the stadiums capacity is 30 000. Plans have been accepted and construction of one of the two stands has commenced. Once the new stands have been completed in 2003, the capacity would have increased to 46 000 and Upton Park would be one of the best stadiums in England. The ground is situated in Upton Park, East London and in the heart of one of London's ethnic minority communities. The Hospitality department at West Ham United is continuously improving. The Stadium has approximately thirty bars, kiosks and suites in total. ...read more.

The use of memos to pass on information to all staff when they sign in at work at the beginning of the day is one method of commination that is used. The meetings that are held before every game are also a method of commination. This is used to pass on any messages, which will affect the work that will be done during the day. The Hospitality department also uses one to one conversations as a form of communication. An example of this is when an employee is being disciplined for some reason, he will have to go to see the kiosk manager with his supervisor. If this communication strategy were stuck to then maybe overall performance for the department would improve. Obviously they haven't devised it for no reason, maybe the director or manger should make sure that everyone is following this communication strategy. What the text book says Communication is essential to the achievement of organisational objectives. In an organisation the aim of communication is to influence others to work towards the achievement of the goals of the organisation. Poor communication results in mistakes, creates anxiety, low morale, inadequate control and aggression. ...read more.

2. Establish constant checks that the communication strategy that is in place is being followed. 3. Introduce some sort of forum at a fixed time to improve links between management and employees. 4. Increase the amounts of communication media used. 5. Introduce a notice board where all staff can go to, to see if any thing relevant to them is introduced. 6. Make management more active with the employees to improve the relations between the two. 7. Ensure there are closer links between all employees and supervisors and managers. 8. Follow the current communication properly, as it seems pretty effective. Conclusion * The current communication strategy has been devised very carefully and should be effective. * Employees are not happy with their working conditions. * Relations between employees and managers are not very good. * Employees feel that there is a lot of discrimination within the department. * The management seem to adopt a laissez faire approach to the department. * Communication theory is not really important in the management's view. * The incentive scheme seems to be very. * There is a wide span of control for the management * The chain of command is pretty long. Communication is not very important in the view of some employees. ...read more.