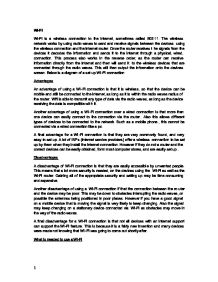 How wi-fi and the Internet may be used by a business.

This would enable the owner of Chello Hotel to be able to read this report without having to have knowledge of each technology before hand. The second good factor about this report is that images are used to illustrate each technology. This is good because it means that each image is used to recognise what the technologies look like. The third good point is that this report sticks to the house style of all of the Chello Hotel documents. Even though this document is not going to be shown publicly by the hotel using the house styles still makes it more official to the hotel and more professional. The final good point about this report is that the layout is consistent throughout. It is all fully justified, size 12, black font, apart from the headings. This is good as it sticks to the original hand drawn plan What are the bad things about the report?/further improvements that could be made One bad point about this report is that it is very long. This could be improved by using more bullet points instead of full sentences to get across the same points. If this method of more bullet points was used not as much detailed information would be able to be within the report. The final bad point about the report is that not all of the images used are not in great detail. Some of the images, however, are in much detail and explain a lot about the technology. This criticism could be improved by using more diagrams of the technologies rather than photographs of them. ...read more.