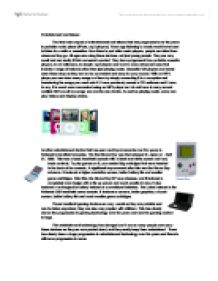 Entertainment and leisure The first main aspect of entertainment and leisure that has progressed over the years is portable music player (iPods, mp3 players). Years ago listening to music would have been to listen to a radio or cassettes. Now there is portable music players, people can take them wherever they go. All ages are using these devices, not just young people. They are very small and can easily fit into someone's pocket. They have progressed from portable cassette players, to cd walkmans, to simple mp3 players and now to more advanced ones that include a range of features other than just playing music. Cassette/ CD players are hardly seen these days as they are not as convenient and easy to carry around. ...read more.

The first Game Boy was first released in Japan on April 21, 1989. This was a basic handheld console with a black and white screen and very basic controls. To play games on it, you needed big cartridges that were inserted in the back of the console. A significant improvement after this was the Game Boy advance. It featured a higher resolution screen, better battery life and smaller game cartridges. After this, the Game Boy SP was releases, and it featured a completely new design with a flip up screen and much smaller in size, it also featured a rechargeable battery instead of conventional batteries. The Latest release is the Nintendo DSI handheld came console. ...read more.

There has clearly been a huge progression in entertainment technology over the years and there is still more progression to come. As well as handheld technlogy other gaming consoles such as the Xbox 360, Playstation 3 have proven very popular, and technlogy including Tv's DVD players and other technology is being constantly developed. Advantages: * Entertainment devices are pocket sized and very convenient to carry around * The games can be educational for children as well as others * The devices can be used anywhere * They can perform multiple functions * Constant progression in entertainment technology Disadvantages: * Since there is always new entertainment technology being released, and people want to stay up to date with it a lot of money if being spent and it can be very expensive * People are becoming laxy as they are just playing games and watch TV ...read more.