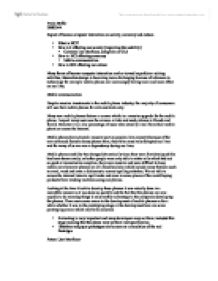 Impact of human computer interaction on society, economy and culture. * What is HCI? * How is it affecting our society (improving the usability ) * Common line interfaces, using bias or GUI * How is HCI affecting economy * Mobile communication * How is HCI affecting our culture Many forms of human-computer interaction can be viewed as problem- solving activities, Interaction design is becoming more challenging because of advances in technology for example mobile phones are increasingly having more and more affect on our lives. Mobile communication Despite massive investments in the mobile phone industry, the majority of consumers still use their mobile phones for calls and texts only. Many new mobile phones feature a camera which is a massive upgrade for the mobile phone, I expect many users use the camera or take and send pictures to friends and family. However it is a low percentage of users who actually e-mail from their mobile phone or access the Internet. Mobile phones have played a massive part on peoples lives recently because of the new advanced features many phones have, they have massively disrupted our lives and for many of us are now a dependency during our lives. ...read more.

* Evaluating is very important and many developers may not have included this stage meaning that the phone may not have met specification. * Sketches and paper prototypes can be seen as a simulation of the real Prototype Future User Interfaces- * Tangible and physical user interface * making information graspable * related to industrial and product design * new input and output modalities * provision of clear affordances * Context-aware user interfaces and How is it affecting our society? Technology changes society. May it be because of cars, guns, skyscrapers and even robots all have made a massive difference to the way we work, live and play? Computer technology is accelerating the change of our lives and raising whole new issues society has to tackle many of these may not even be logical? Sure it means that the machines do things we don't want to or can't do however is it an ethical approach? It stretches the limits of the law - for example if you steal someone's virtual money in a virtual world/ game are you a still labeled a thief? ...read more.

HCI is affecting or economy massively in many ways for example banking is only one of the affects computers now have with humans for example, we now have computerised ways of depositing our money into the bank, this is often known as the faster more efficient way as because of this the money is credited to our accounts straight away however when it is done manually the process may take up to 3 days. It has massive affects on the way we live because without the interaction many of us now would not be able to cope. How is HCI affecting our culture? Software products have a hold over many different people which include members of different countries, religions, and cultures. People who speak different languages, have different perceptions, and have different life styles and expectations. Culture influences not only interface design but also the design methods which are incorporated in buildings. Usability methods might be influenced by the culture of the employees for example if the employee is in a rich expensive culture and around more economically better off people the human computer interaction will be used more frequently and with a further extent. ?? ?? ?? ?? Yasin Haffar 20082344 ...read more.