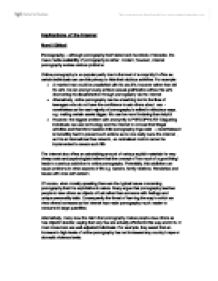 Implications of the Internet Moral / Ethical Pornography - although pornography itself dates back hundreds of decades, the mass media availability of pornography is rather modern; however, Internet pornography evokes various problems. Online pornography is so popular partly due to the level of anonymity it offers as certain individuals can use this privacy to hide their dubious activities. For example: * A married man could be unsatisfied with his sex life, however rather than tell his wife, he can anonymously achieve sexual gratification without his wife discovering his dissatisfaction through pornography via the Internet. * Alternatively, online pornography can be a teaching tool to the likes of teenagers who do not have the confidence to ask others about sex - nonetheless as the vast majority of pornography is edited in ridiculous ways, e.g. making certain assets bigger, this can be more hindering than helpful * However, the biggest problem with anonymity is PAEDOPHILES! Disgusting individuals can use technology and the Internet to conceal their illegal activities and therefore massive child pornography rings exist - nevertheless it is incredibly hard to prevent such actions as no one really owns the Internet, as it is an international free network, so centralised control cannot be implemented to censor such filth The Internet also offers an astonishing amount of various explicit materials for very cheap costs and psychologists believe that the concept of 'too much of a good thing' leads to a serious addiction to online pornography. ...read more.

* Former French President Jacques Chirac was far more apocalyptic stating that the prevalence of English on the Internet is a "major risk for humanity," which threatens to impose linguistic and cultural uniformity on the world - and as a result the French government inflicted a mandate that all Web sites in France must provide their content in French. Alternatively, there are some positive aspects of the Internet when concerning language. People in foreign countries can now access online versions of nearly any resource, so if French speakers in non-Francophone regions wish to read the French newspaper they can do so thanks to the Internet. People unable to speak English are provided with search engines in their own language, in 2008 Google owned around 800 domains, here's just a few: * www.google.com (USA) * www.google.co.uk (UK) * www.google.com.af/ (Afghanistan) * www.google.cn/ (China) * http://www.google.com.ng/ (Nigeria) Whatever country you are in Google will provide the best results in your spoken language; therefore even if you cannot speak English, you can still search the Internet. More importantly, online users can now get remote access to government information, educational materials, scientific journals, and, ultimately, the digitized collections of the major national libraries in an array of languages, enhancing learning capabilities. Of course the Internet cannot prevent the global dominance of the English language but it does provide the opportunities to communicate with other members of geographically dispersed communities. Today more than 100 different languages are used in discussion groups, including not just the major national languages but Catalan, Gaelic, Navaho and Welsh, among so many others. ...read more.

Buying items that you need immediately is a problem, unless you pay extra costs for 'next day delivery', which can be substantially high. Additionally, if you decide to return your item, this requires even more phone calls or emailing and you could also be charged for the shipping back costs. Diminishing physical stores - better deals online Another significant problem when concerning commerce is the Internet has diminished the value of certain 'brick and mortar' stores, and combined with the current economic climate, has resulted in numerous chain stores having to shut down, such as Woolworths, Jane Norman and TJ Hughes. In October 2010, over 89% of people had reported that they shopped online and Verdict Research experts estimate that by 2014 online shopping spending will grow by �14 billion (61%) - in 2008 people already spent �14.7bn online. [18] The increase use of online stores like Amazon, which allows individuals to find goods at the lowest price, means people are benefiting from the so-called "flight to value". In todays economic climate average people can no longer afford to go out on a massive shopping spree and instead stay at home surfing online for a bargain. However, another factor of the Internet that diminished the value of stores like HMV is the ability to illegal download music, movies and TV shows. People can no longer afford to buy their favourite songs or films and therefore resort to illegal download them from various websites via the likes of torrents. Hence, HMV is now going through tough times, being very close to closure, if it weren't for a Russian investor. ?? ?? ?? ?? ...read more.