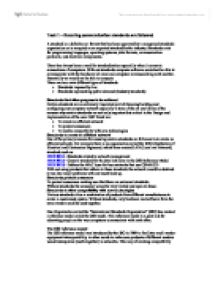 Task 1 - Ensuring communication standards are followed A standard is a definition or format that has been approved by a recognized standards organisation or is accepted as an expected standard by the industry. Standards exist for programming languages, operating systems, data formats, communication protocols, and electrical components. There has always been a need for standardisation especially when it comes to connections of computers. With out standards computer software would not be able to communicate with the hardware let alone one computer communicating with another. Essentially we would not be able to compute There are two main different types of standards: * Standards imposed by law * Standards representing public demand (Industry standards) Standards that allow progress to be achieved Certain standards are an extremely important part of choosing building and configuring any computer network especially a state of the art one! Some of the reasons why certain standards are not only important but critical to the Design and implementation of the new C&T block are: * To create an efficient network * To protect consumers * To enable compatibility with new technologies Standards to create an efficient network One of the primary reasons for ensuring certain standards are followed is to create an efficient network. For example there is an organisation called the IEEE (Institution of Electrical and Electronics Engineers) which have created LAN (Local are Network) standards such as: IEEE 802.1- Standards related to network management IEEE 802.2- General standard for the data link layer in the OSI Reference Model IEEE 802.3- Defines the MAC layer for bus networks that use CSMA/CD With out using products that adhere to these standards the network would be destined to run into major problems with out much back up. Standards protect consumers To protect consumers-making sure that there are universal standards Without standards the consumer would be very limited and open to abuse. Standards to allow compatibility with new technologies Various standards allow a combination of products from different manufacturers to create a customised system. ...read more.

Twisted pair cable (10BASE-T) Twisted pair (also known as 10BASE-T) is ordinary telephone twisted pair wire. Twisted pair (10BASE-T) supports Ethernet's 10 Mps transmission speed hence "10" in 10BASE-T. The "BASE" refers to base band signaling and the "T" represents twisted pair just like the "F" for fiber optics in 10 BASE-F. There are many variations of twisted pair cable including: * STP (Shielded Twisted Pair) * UTP (Unshielded Twisted Pair) * ScTP (Screened UTP) Coaxial cable (10BASE-2) Coaxial cable was invented in 1929 and first used commercially in 1941. Coaxial cable is called "coaxial" because it includes one physical channel that carries the signal surrounded (after a layer of insulation) by another physical channel. The outer channel serves as an earth. Many of these cables or pairs of coaxial tubes can be placed in a single outer casing and, with repeaters, can carry information for a great distance. Fiber optics (10BASE-F) Fiber optics sends digitized messages or information by light pulses along hair-thin glass fibers. Surrounding each fiber is a protective shell. This protective shell has a high index of refractance so that the light is internally reflected and travels the length of the fiber without escaping. Optical fiber cable can be made smaller and lighter than the conventional cooper or coaxial cable, yet they can carry much more information and is in general not subject to electromagnetic interference (EMI) and the need to retransmit signals. Most telephone company long-distance lines are now of optical fiber and it's also commonly used as a back bone linking two or more sections of a network.. However the glass fiber requires more protection within an outer cable than copper. For this reason and because of costs many companies do not use it. The two most popular types of network cab ling are twisted-pair (also known as 10BASE-T) and thin coax (also known as 10Base2). 10BaseT cabling looks like ordinary telephone wire, except that it has 8 wires inside instead of 4. ...read more.

provide one allocated area for storing all documents (word processing, spreadsheets, database, audio and Image documents etc). This in turn enables backing up data to be done more easily as well as efficiently. *Saving and retrieving files from remote locations Students or staff may have worked on a project or task at home or college but may be to large to store on transportable disks, however hey could use the Internet to access the college network (internal Internet-Intranet) either by sending it to a mail server then retrieving when needed or by the network administrators setting up remote access privileges to staff or students. *Communicating with colleges across the building or across the continent A staff member or student may be stuck for inspiration or may simply need some advice from another member of staff or a fellow student. His is not always convenient for both parties not to mention time consuming. One of the features of a computer network is the ability to send messages to any persons (providing you know their log in names) either individually or the same message to a selected number of people or for management purposes a broadcast message can be sent to all users in a particular school or the entire college network. Benefits of installation of network at new site Accessing resources, printing to multiple printers, saving and retrieving files from remote locations, and communicating with a colleague across the building or across the continent are the advantages of a computer network that helps users get their work done easier, and gives students the ability to increase their learning. As you can see the advantages of having a computer network at Uxbridge College out weighs the disadvantages. Uxbridge College's management staff can monitor on a daily basis any useful statistics such as overall achievments, profit margins, payments and other information. Without a computer network linking the massive College, a significant amount of time would be required to assemble this kind of information. Uxbridge College's network would allow the company to identify schools that are struggling and meet them with appropriate responses. ...read more.