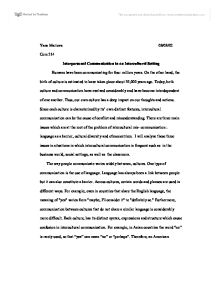 Interpersonal Communication in an Intercultural Setting

Yana Martova 08/08/02 Com 214 Interpersonal Communication in an Intercultural Setting Humans have been communicating for four million years. On the other hand, the birth of culture is estimated to have taken place about 35,000 years ago. Today, both culture and communication have evolved considerably and have become interdependent of one another. Thus, our own culture has a deep impact on our thoughts and actions. Since each culture is characterized by its' own distinct features, intercultural communication can be the cause of conflict and misunderstanding. There are three main issues which are at the root of the problem of intercultural mis- communication : language as a barrier, cultural diversity and ethnocentrism. I will analyze these three issues in situations in which intercultural communication is frequent such as in the business world, social settings, as well as the classroom. The way people communicate varies widely between, cultures. One type of communication is the use of language. Language has always been a link between people but it can also constitute a barrier. Across cultures, certain words and phrases are used in different ways. For example, even in countries that share the English language, the meaning of "yes" varies from "maybe, I'll consider it" to "definitely so." Furthermore, communication between cultures that do not share a similar language is considerably more difficult. ...read more.

For example, North American males frequently mask and internalize their facial expressions because they have been taught that showing emotion is not a sign of "manliness," while an Italian male feels none of these restrictions and uses facial expressions freely and frequently. Non-verbal communication includes not only facial expressions and gestures, but it also involves, proximity, and perception of time. The word proximity refers to how different groups of people use and perceive their social and personal space. Every person is surrounded by a psychological "bubble" of space, this bubble contracts and expands depending on the person's cultural background. For example, Northern Europeans, English, Scandinavians and Germans- tend to have a larger zone of personal space and often avoid touching and close contact unless absolutely necessary. They require more room around them and structure their lifestyles to meet this need for more room. Thus the English are stereotyped as being distant and impersonal, not showing great emotion. In contrast, Italians, Russians, Spaniards, Latin Americans, Middle Easterners and the French generally tend to like and condone close personal contact. Imagine, also, an American businessman meeting with a Spanish colleague when attempting to close an important business deal. The American may feel a strong aversion to the Spaniard's perfectly friendly, normal physical actions such as extended handshaking, seating himself very close to his colleague and invading the American's closely guarded bubble of personal space. ...read more.

This is the idea of ethnocentrism is a sociological concept that states, that our customs, beliefs and attitudes are of central importance and a basis for judging all other groups. Ethnocentrism derives from patriotism and an overwhelming pride of one's culture. We become infatuated with our own culture and tend to dismiss others without any reason or logic. Furthermore, ethnocentrism can lead to a stereotypical view of other cultures. An example is the belief that the unfortunate economic conditions of African American man and woman today are attributed solely to their racial characteristics, ignoring the environmental circumstances that are the real cause of their low income. Hence, this type of attitude is harmful to the communication process since one communicator has a premature judgment about the other. In conclusion, intercultural communication encompasses many problems. Language represents one of the many obstacles, since each culture has its proper expressions. Moreover, cultural variations also exist in the rules for general discourse in oral communication. Similar to verbal communication, there are also variations in non-verbal communication between cultures. Gestures, facial expressions, sense of time and personal distance take different forms in different cultures. Variations in values, social relationships, religion, economy and politics consist of only a few of these diversities. These differences can be the source of ethnocentrism, if one becomes overly patriotic in regard to one's own culture. Intercultural problems can be avoided if we all develop mindfulness, a sense of flexibility and seek information about the other culture. ...read more.