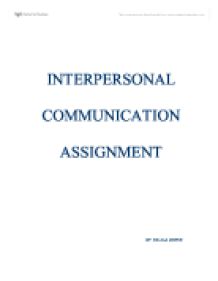 INTERPERSONAL COMMUNICATION ASSIGNMENT BY PAULA ROWE Introduction Interpersonal Communication is a form of communication between people that occurs daily within different social networks and is a process that is not easily defined. One of the ways of defining interpersonal communication is to compare it to other types of communication. Interpersonal communication differs in many ways to other types of communication as there are fewer individuals involved in this type of communicative activity as the participants involved are in close proximity to each other, such as interviews, meetings, parent and teacher relationships etc. Interaction on these levels is different to interaction between friends and family members, as the latter is on a more personal level. The process of being communicative develops when a fact is observed or an idea has been formulated by an individual (the sender). This observation is then translated into a message that is relayed to another person (the receiver) who must then interpret the message and provide feedback. This indicates that the message has been correctly understood and appropriate action can then be taken in response to what is being said. In some cases mistakes can be introduced with regard as to how an individual may interpret this process, for example, misunderstandings can occur if the sender has not communicated on a level of understanding or if the receiver has not listened carefully and fails to provide adequate feedback. ...read more.

Ideas had to be put forward and feedback was relayed as to how these events were going to take place. I found this type of communication quite interesting as I could give a response as to what was going on and how I was going to go about being involved. Cultural Differences Sometimes our culture can have a huge effect on the way we communicate with others. When two individuals of different cultures communicate they can often find it difficult to communicate at equal levels. I found this evident when I was working on my placement as the majority of clients that came in were from South Asian backgrounds. Their understanding of English was minimal so gestures were made with hands so they could relate to what was being discussed if the discussion was in English. This was something I experience when we had a meeting with the Asian women, as one of my (Asian) colleagues conducted the meeting which was mainly spoken in their mother tongue. It was relayed to me what was being said by others in the meeting. However, even when two cultures speak the same language there is always room for misunderstandings. Assertiveness Assertiveness is having the ability to honestly express your opinions, attitudes and feelings without breaching the rights of others. ...read more.

Donald Schon (1983) names two types of reflective practice. One is reflection-in-action and the other is reflection-on-action. Gibbs reflective cycle is a cycle of what happened, what we may be feeling and thinking, what was good or bad about the experience that was felt, what sense could be made of the situation, what, if anything could have been done about the situation, and if this situation arose again what would be my action plan. I reflected on certain aspects of my placement. One particular memory was my first day when I was told I would be attending a conference which would also be attended by councillors in my area. My first thought of this is that I was very nervous at the thought of even been in a meeting of this kind as it would be my first time. Conclusion Having strong interpersonal communication skills are very important for organisations that supervise the work of others. Good interpersonal communication skills are essential in processes such as: management, counselling, mentoring and parenting skills. The majority of individuals think that they can communicate very well, however some people feel apprehension when they are in uncomfortable situations and most of us can improve our interpersonal communications skills. Transactional communication is viewed as a process involving both the sender and the receiver. This theory takes into account people's experiences of culture, personal history and hereditary. ...read more.