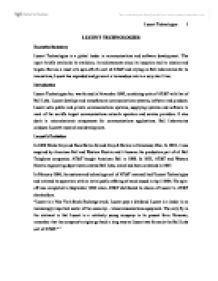 LUCENT TECHNOLOGIES Executive Summary Lucent Technologies is a global leader in communications and software development. This report briefly overlooks its evolution, its achievements since its inception and its mission and targets. Born as a result of a spin-off of a unit of AT&T and relying on Bell Laboratories for its innovations, Lucent has expanded and grown at a tremendous rate in a very short time. Introduction Lucent Technologies Inc. was formed in November 1995, combining units of AT&T with that of Bell Labs. Lucent develops and manufactures communications systems, software and products. Lucent sells public and private communications systems, supplying systems and software to most of the world's largest communications network operators and service providers. It also deals in microelectronic components for communications applications. Bell Laboratories conducts Lucent's research and development. Lucent's Evolution In 1869 Elisha Gray and Enos Barton formed Gray & Barton in Cleveland, Ohio. In 1881, it was acquired by American Bell and Western Electric and it became the production part of all Bell Telephone companies. AT&T bought American Bell in 1899. In 1925, AT&T and Western Electric engineering departments created Bell Labs, which had been combined in 1907. ...read more.

Mission and Future Outlook Lucent's aim is to offer customers world's finest innovative communications systems, products, technologies, and support, and to deliver higher, continued shareowner value. Hoover online has this to say about Lucent: "Does the name Lucent Technologies ring a bell? The company is one of North America's top makers of telecom equipment and software. The storied Bell Laboratories develops many of Lucent's products, but the company has become a force in the broadband networking market through acquisitions. Most of Lucent's customers are telecom providers such as AT&T (12% of sales). Lucent, itself a spin-off from AT&T, has spun off its enterprise networks (Avaya) business and its microelectronics (Agere Systems) unit. It is also selling non core businesses to focus on high-growth areas, including fiber optics, and cutting costs through layoffs and other restructuring."3 The company provides the systems, software and services for what is the largest network build-out in history. The company is focused on a combination of optical, data, networking wireless technologies with the software and services to support them. Lucent has more than 100,000 employees worldwide, with headquarters in Murray Hill, N.J., - about one-quarter of the employees based outside the United States - and has offices in more than 65 countries and territories around the world. ...read more.

LambdaRouter was purchased by Global Crossing. Under a multimillion-dollar contract, Global Crossing will deploy LambdaRouters in the United States and Europe. Due to the LambdaRouter, combined with Lucent's recently announced intelligent optical software platform, service providers will be able to manage high-speed traffic at the wavelength level, and also provide bandwidth where and when it is needed in the network. In January, the second-generation of the Lucent Softswitch was introduced, building on its market leadership. The softswitch is the core of new network architecture. More than 20 customers including BT Ignite, and NTT Communications recurrently conduct trials using the Lucent Softswitch. Lucent is also the world leader in the high-growth areas of the communications networking market. It holds controlling positions in markets and technologies such as Voice over Internet Protocol (VoIP), remote access, Symmetric Digital Subscriber Line (SDSL), optical networking, Code-Division Multiple Access (CDMA) wireless technology, ATM access and core and edge switching, frame relay, multi-service WAN switching, and networking services and support. Conclusion Lucent Technology has become a global leader in a very short span of time, diversifying its products and services into different areas of networking, software production and e-business. At the same time it has been selling off its units and spinning off other companies to maintain its position in the market. ...read more.