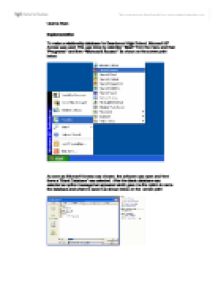 Implementation To make a relationship database for Beardwood High School, Microsoft XP Access was used. This was done by selecting "Start" from the menu and then "Programs" and then "Microsoft Access" as shown on the screen print below: As soon as Microsoft Access was chosen, the software was open and from there a "Blank Database" was selected. After the blank database was selected an option message bar appeared which gave me the option to name the database and where to save it as shown below on the screen print The new blank database was saved as "Library System" in the "A2 ICT Coursework Folder". As soon as the A2 ICT coursework folder was chosen I created another folder naming it "Project" which will store all my database project work only. Also in that A2 ICT coursework folder I also created other folders which would hold my other parts of my coursework such as Analysis, Design, Implementation and Testing work. By creating these folders it's a standard way of working which will save me a lot of time and my files that I want to access will be easy to find as they are stored in folders. As soon as saved the new blank database I first started to create my main tables which contain valuable information for the system to work. ...read more.

There is also a validation set for the Date of Birth field which means that anybody between the age of 11 and 16 will be a working data that will be accepted. And if the wrong date of birth is inputted into the system an error message will appear informing the user to enter a valid date of birth that is accepted within the criteria set. Year Group The year group has been validated so that it only allows any year to be entered from year 7 up to year 11. If any data under year 7 or above 11 is inputted it will be rejected and an error message will appear automatically informing the user to enter a valid year group between year 7 and year 11 Town County For the town and county a default value has been entered because everybody who attends Beardwood School lives in Blackburn. Therefore every time a new record needs to be made for a student the end user will not need to repetitive type every single time Blackburn in the town field which means Blackburn will be automatically present every time a new record is made. This means that it saves on input time and also limits the chances of error being inputted in to the system Post Code the post code was also given ...read more.

Price of Book For the price of book the format was changed to currency and a validation rule was set for the price of the book to be more than �0.00 as no more than cost less than Number of Rentals Validations for Payments PaymentID BorrowerID Payment amount After all the validation were set up for all the tables. The next step was to create a relationship between the tables and this was done by clicking the relationship button on the main screen which looks like as shown on the screen print From the relationship above it shows 1 to many relationship between Borrower and Payments because one borrower can make many payments whereas a payment can be only be made by a specific borrower. After I created my relationships I then started to create data entry forms because entering data into the tables does not look professional and can be confusing. And also by creating data entry forms I am meeting one of the end users requirements that the "system should be user friendly and easy to use" The first form that was created was the borrower form and a wizard was used to create the forms as it much quicker to create forms from wizards rather than designing and making your own. This how the borrower's data entry form looks like Usama Khan ...read more.