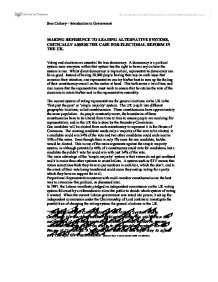 Making Reference To Leading Alternative Systems, Critically Assess the Case For Electoral Reform In the Uk.

MAKING REFERENCE TO LEADING ALTERNATIVE SYSTEMS, CRITICALLY ASSESS THE CASE FOR ELECTORAL REFORM IN THE UK. Voting and elections are essential for true democracy. A democracy is a political system were everyone within that system has the right to have a say on how the system is run. Whilst direct democracy is impractical, representative democracy can be as good. Instead of having 30,000 people having their say on each issue that comes to their attention, one representative can try his/her best to sum up the feeling of their constituency overall on the matter at hand. This both saves a lot of time and also means that the representative must work to ensure that he retains the vote of the electorate to retain his/her seat in the representative assembly. ...read more.

Even though there is only 1% more for one candidate, he/she would be elected. This is one of the main arguments against the simple majority system, as although potentially 66% of a constituency could vote for candidates, but a candidate they didn't vote for could win with just 34% of the vote. The main advantage of the 'simple majority' system is that voters do not get confused and it is easier than other systems to count ballots. A system such as STV means that voters sometimes think they have to put numbers in each box, which the don't, and in the event of their vote being transferred could mean they end up voting for a party which they have no support for at all. ...read more.

A referendum remains the right way to agree any change for Westminster."(Extract from Labour partys 2001 manifesto) The Commission recommended a new system called the Alternative Vote Plus (AV+), a system which combines an increase in proportionality with a strong link between voter and MP and increases the ability of each voter to choose the candidate who best represents them. The Fact that the British Government has reviewed the process means that doubts about it are occurring across the board. We await to see whether or not the referendum will take place as promised by Labour, or if the topic will be allowed to fade into the backround. There are already groups set up to try to hold Labour to its promise, such as 'The Electoral Reform Society' (www.electoral-reform.org.uk) and 'The Constitution Unit' at University College, London (www.ucl.ac.uk/constitution-unit). ?? ?? ?? ?? Sam Carbery - Introduction to Government ...read more.