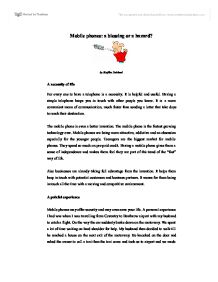 Mobile phones: a blessing or a hazard?

Mobile phones: a blessing or a hazard? by Rafika Saidani A necessity of life For every one to have a telephone is a necessity. It is helpful and useful. Having a simple telephone keeps you in touch with other people you know. It is a more convenient mean of communication, much faster than sending a letter that take days to reach their destination. The mobile phone is even a better invention. The mobile phone is the fastest growing technology ever. Mobile phones are being more attractive, addictive and an obsession especially for the younger people. Teenagers are the biggest market for mobile phones. They spend so much on pre-paid credit. Having a mobile phone gives them a sense of independence and makes them feel they are part of this trend of the "fast" way of life. ...read more.

Incidents of consumers who have been attacked in order to take their mobile phone is on the increase. Many of these attacks were fatal and in most cases it leaves the person traumatised and in shock. It is rather ironic that for the many people who acquire a mobile phone thinking that it will give them security and safety will suddenly find it has the opposite effect of actually put their lives in danger. A bright future for mobile phones? May be future developments in the technology of mobile phones will be able tom overcome all these problems and makes the possession of a mobile phone a real blessing to the point where they become part of our normal life without having to worry about their side effects. This process is already underway, and many users are already addicted to their use. Businessmen and businesswomen who are constantly on the move have already seen the benefits of being constantly in touch with customers, clients, and business partners. ...read more.

In summary, the report is quite good. The report states a number of benefits and drawbacks of mobile phones, with using an example of a situation. However the report could have been more detailed, especially in sections such as 'Are ...

The report states that mobile phone's are developing at the fastest levels, although why is this the case? The report could include 'Mobile phones are developing and changing month by month, which is fast developing. This is due to that their are a number of mobile phone brands, operators and software/hardware developers. All the above, creates competition, and this competitiveness drives innovation. Thus, this improves the technology at a fast pace'.

The section 'A Bright Future For Mobile Phones', has a spelling mistake. As the report states 'mobile phones will be able to tom'. I'm assuming that the word should be 'to', and this should be corrected within the report. The writing style is quite formal, and the student does make sense on the majority of their sentences, which gives a clear understanding.