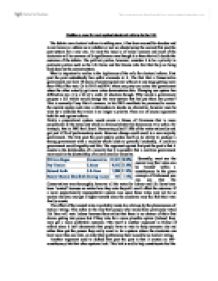 Outline a case for and against electoral reform in the UK.

Outline a case for and against electoral reform in the UK The debate over electoral reform is nothing new, it has been around for decades and in real terms is a debate as to whether or not we should scrap the current first past the post system for a new one. To most the issue is of minor concern and most of the electorate will be unaware of it significance even though it is them that will decide the outcome of the debate. The political parties, however, consider it to be a priority in particular parties such as the Lib Dems and the Greens who feel that they are being hard done by the current system. What is important to realise is the legitimacy of the calls for electoral reform. First past the post undoubtedly has unfair elements to it. The fact that a Conservative government can have 18 years of uninterrupted rule without at any stage getting more than 43% of the vote. Or in 1951 and1974, when one party can come into government when the other actually got more votes demonstrates this. Changing our system has difficulties too; it is a bit of a catch 22 situation though. Why would a government propose a bill which would change the very system that has put them into power? ...read more.

It has become more common for MPs to be elected with the support of less than 50% of the voters- at present 312MPs of a total of 659 are in this position. Fans of first past the post would say to this that very few systems are exactly proportional (and those that are have coalitions) and that any disadvantages of the current system that are covered up will give way to new disadvantages of a new system. Fortunately our Tony Blair is aware of this so he hasn't leapt on the bandwagon of electoral reform yet. Soon after he came to power Tony got Lord (ex-Labour and now Lib Dem) Jenkins to investigate and produce a report on the possible alternatives to first past the post. However in a bid to keep everyone happy Tony told Roy that anything that he came up with must preserve the two main strengths of the current system. The deliver of a single strong government and the MP-electorate link. Lord Jenkins finally came back with an alternative of a system in which voters list candidates by preference. If no candidate gets 50% of the first preferences, the least popular candidate is eliminated and his second preference votes are reallocated. This process continues until one candidate gets 50% of the votes. Also with AV plus there are `top up MPs'. ...read more.

We can probably expect this referendum to come just as the current Labour government id dying and looks as though it might lose and will then pull an ace out of the pack, a referendum on electoral reform which could stop the Tories from ever winning a government again. Currently Labour will be not keen to change the system. They have tried different systems on smaller scale elections in the UK, for example the Scottish and Welsh assembly elections and the London mayor elections. Labour have ironically lost in each of these elections (except in Wales where they later formed a coalition with the Lib Dems) and these bad experiences of other electoral systems can only make the idea of scrapping first past the post less appealing, as many Labour MPs will tell you. My personal view is that any electoral system will have disadvantages and will be disliked by some. Some parties will always feel unfairly represented. Therefore these aren't good grounds to call for reform and taking this into account, first past the post is a good alternative. Arend Lijphart, a leading academic expert on the subject, concluded in his study of 27 countries between 1945 and 1990 that "electoral systems tend to be very stable and resist change" and if this is true I think we should follow the clear advice of Sir Paul McCartney and "Let it Be." ...read more.