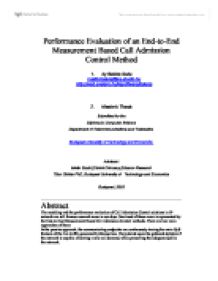 Performance Evaluation of an End-to-End Measurement Based Call Admission Control Method 1. by Bal�zs So�s mailto:balazs@ks-studio.hu http://web.axelero.hu/kssoftware/balazs 2. Master's Thesis Submitted for the Diploma in Computer Science Department of Telecommunications and Telematics Budapest University of Technology and Economics Advisors: Istv�n Szab�,D�niel Orincsay,Ericsson Research Tibor Cinkler PhD, Budapest University of Technology and Economics Budapest, 2003 Abstract The modeling and the performance evaluation of Call Admission Control solutions in IP-network are still famous research areas in our days. One trend of these areas is represented by the End-to-End Measurement Based Call Admission Control methods. There are two main approaches of them: In the passive approach, the communicating endpoints are continuously tracing the main QoS features of the live traffic generated by themselves. They decide upon the gathered statistics if the network is capable of serving a new call demand, while preserving the adequate QoS in the network. In the active approach, the endpoints generate test-packets in the network to measure their delay and jitter in order to estimate the available network resources. In this thesis a new Call Admission Control method is proposed for IP-telephony-gateways that is based on the active method called Self Loading Periodic Streams (SLoPS). The basis of this admission control is that the gateways periodically test the actual available-bandwidth in the network with the generation of short probe-streams. If the packets of the streams get lost or suffer too long delay, then the given gateway does not admit any demands in the next period. On the other hand, if the probe-stream succeeds, so there is still available bandwidth capacity, then a given number of calls can be admitted in the network in the next period. The periodic testing causes a limited amount of overhead traffic for the network, but enables the immediate call admission control decision on a new demand's arrival. I have worked out and implemented this new call admission control method and run simulations in the network simulator ns-2 for a basic performance evaluation. ...read more.

Because the algorithm of D only calculates OWDs we fused the roles of S and D and implemented them in one algorithm. In Figure 5 we can see the flow chart of operation of an edge router using our call admission control. The first part of the diagram implements the role of the destination router D (Packet arrives with type (1), (2) and (3) parts), the rest implements the algorithm of the role of S. Figure 5 - Flowchart of Call Admission Control method in edge routers In the network a packet holds the following piece of information in its header for CAC: * * Packet type 1. 1. real voice stream packet 2. 2. probe-stream packet 3. 3. request for probe-stream statistics packet 4. 4. statistics packet * * Source node * * Destination node * * Stream ID (to which the packet is assigned) * * Sequence number in the stream * * Timestamp (sending time) Let's see what happens when a packet arrives at the edge router: If the destination router D receives a voice-stream packet (1), then it is simply forwarded out of the network. In case of D receives a probe-stream packet (2), D first takes a look at the Stream ID. If D knows about that probe stream, then records the packet's one-way-delay OWD (arrival time - send time) and adds information to the affected stream's statistics. If D does not know about the packet's stream, then inspects its Sequence number. If it is zero, then the packet is a new stream's first packet. New statistics file is opened for the new stream and measuring begins. If a packet with an unknown Stream ID and a Sequence number > 0 arrives, it is ignored. If D receives a request for probe-stream statistics packet (3), then the streams statistics is processed: The LP (number of lost packets), SPCT and SPDT metrics of the stream calculated and sent back to S in a probe-stream statistics packet (4). ...read more.

First, the questions of QoS were outlined. Then the concept of Differentiated Services was introduced, whose extension could be the new method. After that, network monitoring and its types, the active and the passive probing were discussed, which are essential for introducing different existing call admission control methods. After the classification of the existing admission controls and finding the place for the new method in the taxonomy, two active probing algorithms were introduced giving a base for the comparison to the new call admission control method. After presenting the base of the method, its full implementation was described in details. A sample simulation script needed for ns-2 was also discussed pausing on the used parameters. Simulations were run in a simple topology to get a rough estimate about the performance of the new call admission control method. The proposed algorithm in the tested environment was capable of offering 75-80 % network utilization, with less overhead traffic than 0.4% towards the (only) destination. The ratio of bad quality flows was under 0.4% almost always. 4.4.2. 4.4.2. Future Work Simulations and the investigation of performance could be extended to wider, multi-hop, best-effort scenarios, where this algorithm is run by more than one edge router. Experiments with dynamically changing conditions, e.g. background traffic would be interesting. It is probable that the adaptive choice of Testing Bandwidth could achieve better performance. The edge routers running the new method should measure the arrival rate of the incoming demands and should adjust Testing Bandwidth of the fleets. It would be also interesting to test the effectiveness of reducing (e.g. halving) the testing bandwidth of the fleets in the case they fail. Measurements should be done in order to compare the performances of this and other active end-to-end measurement based CAC methods. 5. 5. Acknowledgements This thesis could not have been completed without the kind help of Istv�n Szab�, who helped with his suggestions, advice and critics. Thank You! I also thank Daniel Orincsay for his useful comments! 6. 6. ...read more.