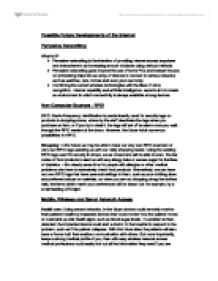 Possible Future Developments of the Internet Pervasive Networking What is it? > Pervasive networking is the intention of providing Internet access anywhere and everywhere in an increasing amount of places using various methods. > Pervasive networking goes beyond the use of home PCs and instead focuses on embedding chips into an array of devices to connect to various networks such as watches, cars, homes and even your own body. > Combining the current wireless technologies with the likes of voice recognition, Internet capability and artificial intelligence, experts aim to create an environment in which connectivity is always available among devices. Non-Computer Sources - RFID RFID: Radio-Frequency Identification is predominantly used for security tags on products in shopping stores, where by the staff deactivate the tags when you purchase an item, or if you try to steal it, the tags will set off an alarm once you walk through the RFID readers at the doors. However, the future holds numerous possibilities for RFID. Shopping: In the future we may be able to have our very own RFID scanners or very own RFID tags assisting us with our daily shopping needs. ...read more.

Apart from in-body devices, on-body monitoring devices could be possible. These small devices could be worn by patients such as 'bracelets' to monitor the patients' pulse and blood pressure, or could be incorporated into particular objects like inhalers for asthmatics. The device could use wireless technology like Bluetooth to send signals from the patient's body to the previously discussed 'home hub' or the patients mobile phone, informing them that for instance atmospheric conditions may exacerbate their asthma and so are suggested to use their inhaler. Transport: Health care devices could be incorporated with transport wireless network devices. For example, wireless telematics in someone's car could automatically call the emergency services if a severe impact occurs. The patients could potentially be comatose, however, the their mobile phone or a special bracelet could be connected with their home hub that contains all their medical data and so the doctors will easily be able to obtain her data on hand so if she is allergic to a certain drug, the doctors can treat her accordingly, and the transport technology will make the medics arrive much faster, hence improving the chances of survival. ...read more.

No longer will we have to turn on lights, open curtains, turning on the TV or computer (if they still even exist) with our hands. Today we must push buttons or for some people clapping turns on lights but in the future voice recognition technology will do it all. Even typing on a computer could become a thing of the past as everything is done via your voice. Or as Emotiv technologies suggest, wireless headsets could use your brain signals to control various aspects of life. Tan Le is highly confident that neuro-technology could be extensively used in the future. For instance, used for interactive gaming or "the user interface of the control system to opening curtains or closing curtains" or "being able to control an electric wheelchair. In this example, facial expressions are mapped to the movement commands." Windows commercial predict that the future will be completely touch screen, with everything involving swiping and dragging. I like the idea of touch screen technology. No longer will there be mice or keyboards or buttons. Everything will be accessible from a flat clear surface, that can be installed anywhere, walls, floors, Microsoft even said chopping boards. ?? ?? ?? ?? ...read more.