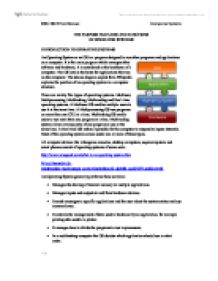 THE PURPOSE FEATURES AND FUNCTIONS OF OPERATING SYSTEMS INTRODUCTION TO OPERATING SYSTEMS An Operating System or an OS is a program designed to run other programs and applications on a computer. It is the main program which manages other software and hardware, it is considered as the backbone of a computer. The OS acts as the hosts for applications that run on the computer. The shown diagram copied from Wikipedia explains the position of an operating system in a computer structure. There are mainly five types of operating systems- Multiuser, Multiprocessing, Multitasking, Multireading and Real-time operating systems. A Multiuser OS enables multiple users to use it at the same time. A Multiprocessing OS run programs on more than one CPU at a time. Multitasking OS enable users to run more than one program at a time. Multireading system allows various parts of one program to use at the same time. A Real-time OS makes it possible for the computer to respond to inputs instantly. Most of the operating system comes under one or more of these types. All computer devices like videogame consoles, desktop computers, supercomputers and smart phones consist of operating systems of some sorts. http://www.wisegeek.com/what-is-an-operating-system.htm http://searchcio-midmarket.techtarget.com/sDefinition/0,,sid183_gci212714,00.html# An Operating System generally performs these services:- * Manages the sharing of internal memory to multiple applications. * Manages inputs and outputs to and from hardware devices. * It sends messages to specific applications and the user about the system status and any occurred error. * It controls the management of data send to hardware by an application, for example printing data send to a printer. ...read more.

The ultra small edition of Linux is capable of networking, file sharing and to be a web-server, none of these are possible in Windows. Both Windows and Linux provide GUI and a command line interface. There is a lot of change in the user interface from Windows 3.1 to XP and to Windows Vista. Linux mainly provide two GUI's - the KDE and the GNOME. The Windows and the .NET Magazines in March 2000 said that the Linux GUI is optional and the Windows GUI is one of the main components of the operating system. The magazines explained that a Linux shows an improvement in the speed, efficiency and reliability without its GUI. It is something that Windows OS cannot dream about. This flexibility of Linux GUI is considered as a good thing which allows experienced and expert users to customise it to their needs. But it makes things harder for new users as they try different versions of Linux. In Windows the Command Line Interface is known as DOS prompt. In Linux it is known as a shell. The command prompts in Windows9x series are similar to each other and in NT class versions have similar interface. Like all Unix versions Linux supports multiple Command Line Interfaces usually known as BASH. The cost is the main difference between a Windows OS and a Linux one. Linux is free or cheap to use in desktops while Windows are really expensive. Microsoft allows a copy of Windows to be used in only one computer, now the company uses software to make sure no illegal copies are used. ...read more.

Because of its ability to run without a GUI it needs less processing power than of Windows. And because of this reason Linux can run on very old computers and make it useful. Linux provide a multiuser licence where Windows do not. Windows is designed to be used in a single computer at a time. The Windows OS is designed to manage a single user at a time while Linux is designed to handle multiple users at the same time. Both and Windows and Linux can run multiple programs at the same time. In the case of hard ware partition Windows can be installed and boot from only a primary partition. A Linux can be installed and boot from either from a primary or a logic partition. So as many versions of Linux can be installed according to the number of disk partitions and we can experiment many Linux at the same time. Martin Ultima, the person related to the Ultima Linux distribution stated that he do not see a future for Linux in desktop computers. His main reasons are: Video drivers are hard to set up, poor support for Wi-Fi, painful software development, problem with printer and other hardware connections, poor OS documentations etc. I personally recommend using Windows as I do not have any previous experience with any versions of Linux. The below chart shows the OS market share till May 2008. It says 91% of OS in use is Windows and Linux comes only by 4.7%. How could 91.1% of Windows users go wrong? Reference: http://www.computerworld.com/softwaretopics/os/story/0,10801,104416,00.html http://www.michaelhorowitz.com/Linux.vs.Windows.html http://www.linux.org http://searchcio-midmarket.techtarget.com/sDefinition/0,,sid183_gci212714,00.html# http://computer.howstuffworks.com/operating-system1.htm ?? ?? ?? ?? BTEC ND IT Practitioners Computer Systems - 1 - ...read more.