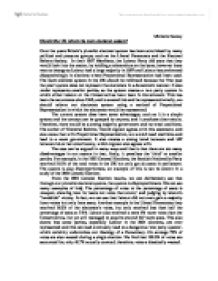 Should the UK reform its main electoral system?

Michelle Feeney Should the UK reform its main electoral system? Over the years Britain's pluralist electoral system has been scrutinised by many political and pressure groups, such as the Liberal Democrats and the Electoral Reform Society. In their 1997 Manifesto, the Labour Party did state that they would look into the matter, by holding a referendum on the issue, however there was no change as Labour had a large majority in 1997 and Labour has preformed disappointingly in elections where Proportional Representation had been used. The main electoral system in the UK should be reformed because the 'first past the post' system does not represent the electorate in a democratic manner. It also under represents smaller parties, as the system creates a two party system in which either Labour or the Conservatives have been in Government. This has been the occurrence since 1945, and to amend this and be represented wholly, we should reform our electorate system using a method of Proportional Representation in which the electorate would be represented. The current system does have some advantages, such as it is a simple system and the concept can be grasped by anyone, and it produces clear results. Therefore, there would be a strong majority government and no weak coalitions. The author of 'Electoral Reform,' David Agnew agrees with this statement, and also states that with Proportional Representation, we would need coalitions and lead to a weak government. ...read more.

Agnew also disagrees with this and David Roberts, author of 'British Politics in Focus,' seems to agree with Agnew stating that our current system works and has been proved to work over may years, while all other electoral systems are flawed, so is there little point in replacing one flawed system with another? It can be argued that, yes, the system should be reformed for a number of reasons as follows; It penalises the 'third' or smaller parties. It is a disproportion system because it is 'seats not votes' that count. It can help foster a two party system, which means that those parties are over represented and leads to a less democratic political system. It can lead to adversarial politics or the domination of one party. It creates a large number of safe seats, which means that many votes are wasted. There is a limited voter choice and voters cannot choose between candidates of the same party. Votes in Constituency's are not of equal value because it depends on whether it is a safe or marginal seat. Representation is disproportionate because some constituencies are larger than others. One alternative system of Proportional Representation that the UK can adapt is the Additional Member System (AMS), which is used in the Welsh Assembly. AMS is a combination of our 'first past the post system' and party list voting. ...read more.

Voters were also able to express opinions effectively. Through looking at the Election results for the Northern Ireland Assembly in June 1998, we ca see that even the minority parties gained seats, such as the Northern Ireland Women's Coalition who gained two seats with 1.61% of the electorate votes. Also, there was no over or under representation that we always see in our electorate system as the percentage of votes and the percentage of seats were similar, for example Sinn Fein received 17.65% of the votes and got 16.7% of the sears in the Assembly. Overall the system was fairer than our pluralist system. However, before deciding to reform, we must consider political issues, which are crucial regarding electoral reform. For example, the way in which the elections proceed must be fair along with the way in which the seats are decided. To be truly democratic, the electorates' views should be represented and parties must not be over represented nor under represented. The Government should be strong like our present government and there should be no weak coalitions. From analysing our current electoral system and analysing others alternative systems, the UK should reform its main electoral system to that of the Single Transferable Vote. This is because the system is remarkably fairer than the first past the post system, and is more democratic. Through reforming to this system, the electorate would have more representation and the UK would be more democratic. ...read more.