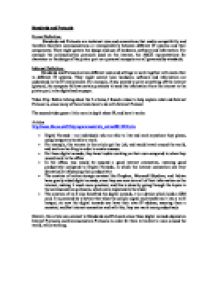 Strand Two ITGS Assignment - Standards and Protocols allow different rules and settings to work together with each other in different IT systems. They might control how hardware, software and information are understood in the IT environment.

Standards and Protocols Formal Definition: Standards and Protocols are technical rules and conventions that enable compatibility and therefore facilitate communications or interoperability between different IT systems and their components. They might govern the design and use of hardware, software and information. For example the communication protocols used on the internet, the ASCII representations for characters or the design of the printer port on a personal computer are all governed by standards. Informal Definition: Standards and Protocols allow different rules and settings to work together with each other in different IT systems. They might control how hardware, software and information are understood in the IT environment. For example, if you wanted to print something off the internet (picture), the computer follows certain protocols to send the information from the internet to the printer port, to be digitalized on paper. Video Clip: Before talking about the 5 articles, I found a video to help explain what and Internet Protocol is, since many of the articles have to do with Internet Protocol The second video goes a little more in depth about IP, and how it works Articles http://news.bbc.co.uk/2/hi/programmes/click_online/8941048.stm * Digital Nomads - are individuals who are able to live and work anywhere they please, using hotspots to be able to work. ...read more.

* These types of information don't have to be pictures that you saved on your storage device; E-Mail is a classic example of information that can be easily lost. In a real life example, there was a missing White House e-mail archive from the run-up to the Iraq War, which is a violation of the Presidential Records Act. * With the current state of the technology, data is vulnerable to both accidental and deliberate erasure, and what people want to see is an environment where we can make sure the data does not die due to accidents, malicious intent or even neglect. * However now, there have been movements among governments saying that companies should not sell software that uses proprietary file formats exclusively. They want these companies to provide an open format so that no one has to fear for the erasure of memorable, and important files This article relates to Standards and Protocols since individuals have been using Communication Protocols over the internet, or Protocols to put the data in storage devices, http://www.ispreview.co.uk/story/2010/09/25/uk-isps-warned-that-failed-ipv6-adoption-is-a-disaster-waiting-to-happen.html * This article is about the fact that the generation of Internet Protocol Version 4 (IPv4) will be running out very soon, as addresses rapidly deplete, and that organizations should adopt the newer IPv6 version * The reason that the IPv4 is running out is mainly due to ...read more.

order for him to make income This article has to do with our topic since Pena hacked into Voice over Internet Protocol networks in order to make money, which is obviously against the law. http://articles.economictimes.indiatimes.com/2012-01-24/news/30659355_1_hackers-polycom-videoconferencing-systems * This article is about how internet protocol videoconferencing through Skype can be hacked into * Last month, a hacker was able to hack into Skype video calls, and was able to eavesdrop on privileged attorney-client conversations and read trade secrets on a report lying on the conference room table * Sort of like the previous article, the unknown hacker was able to hack into the IP address of the video conference, and was able to listen in to confidential information * Nothing has been revealed to why the hacker has done it, and none of the information in the video conferences have been leaked over the web, or in any other form * However, this is quite frightening since it now opens up the possibilities that hackers have the ability to hack into any video call, and have the ability to steer the camera around with just a move of a mouse. This relates back to the topic since the hacker was able to interfere with the IP address, and alter the instructions so that the hacker was able to control the camera in the Skype call ...read more.