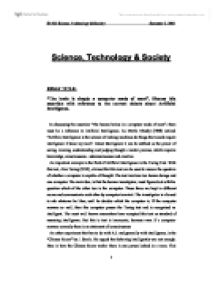 &quot;The brain is simply a computer made of meat&quot;. Discuss this assertion with reference to the current debate about Artificial Intelligence.

Science, Technology & Society ESSAY TITLE: "The brain is simply a computer made of meat". Discuss this assertion with reference to the current debate about Artificial Intelligence. In discussing the assertion "The human brains is a computer made of meat", there must be a reference to Artificial Intelligence. As Martin Minsky (1968) noticed "Artificial Intelligence is the science of making machines do things that would require intelligence if done my men". About Intelligence it can be defined as the power of seeing, learning, understanding and judging though a mental process, which requires knowledge, consciousness - subconsiousness and emotion An important example in the field of Artificial Intelligence is the Turing Test. With this test, Alan Turing (1950), claimed that this test can be used to answer the question of whether a computer is capable of thought. The test involves two human beings and one computer. The main idea, is that the human investigator, must figured out with his question which of the other two is the computer. These three are kept in different rooms and communicate each other by computer terminal. The investigator is allowed to ask whatever he likes, until he decides which the computer is. If the computer answers so well, then this computer passes the Turing test and is recognised as intelligent. The most well known researchers have accepted this test as standard of assessing intelligence. ...read more.

They need someone continuously update information for them. And the ability of learning is very important to call something intelligent. Also, an other problem is the vision of computer systems. Of course, to call someone at least intelligent, ha can see whatever normal people do, without any instructions for the manufacture On the other, computers have been developed remarkably to a level which reach perfection it terms of speed, calculation and generation in cascade process. Also, new types of computers are been designed, with much more capabilities than the previous one. An example is storage as the years passes we have more storage in less space. But to say that a computer system is intelligent, cannot be based on the above parameters. These systems, have not yet achieved consciousness and therefore limit their ability to judge and understand Also, to call a computer system intelligent it requires some characteristics that they are connected with intelligence in human behaviour: understanding language, problem solving etc. Addinitionally, the human mental process is not based only on data and input. This is because, data are auto-generated and not previous supplied, e.g. a teenager finds a wallet and then decides whether to keep the money or hand them in the police based not onto a previous experience, memory or outside information, but on the criticism developed by consciousness and sub-consciousness. In addition to, there is no computer program that has its own freedom. ...read more.

Nowadays, more and more people use robots for their job. Especially, managers of large factors, cause they are cheaper they don't complaint etc. On the other hand, workers agree for this situation, if and only of, robots going to perform the dirty or the dangerous jobs At the end, a quite huge problem, is speaking and feeling too. For example, everyone understands worlds like friendship, love and we have some feelings for them either positive either negative. We ca not say a computer system intelligent, if it does not understand the above words or meaning like partnership, where two persons can help each other in difficult situations The last 10 years, scientists are working on a bio-computer system. This system use human-neural tissue connected to an electronic circuit. This idea hopes to link the power of neurones to create conscious state with the effiency of computer processing. Such projects hopefully will create an original state of computer intelligence Also, it is well known, that the human brain is the most difficult part of the human to explain, even from entire the world. We have now discuss this assertions with the most current sources and debates for artificial intelligence. My point of view, is that computer systems only succeed in some parts of intelligence, as playing board games, take care of people's health etc. But, they do not reach the entirely meaning of intelligence such as consciousness and motions. ...read more.