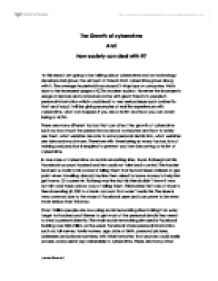 The Growth of Cybercrime

The Growth of cybercrime And How society can deal with it? In this essay I am going to be talking about cybercrime and as technology develops and grows, the amount of threats from cybercrime grows along with it. The average household has around 2-4 laptops or computers, this is due to the increased usage of ICT in modern society. However the increase in usage of laptops and computers come with great threats to people's personal information which could lead to very serious issues such as identity theft and fraud. I will be giving examples of real life experiences with cybercrime, what can happen if you are a victim and how you can avoid being a victim. There are many different factors that can affect the growth of cybercrime such as, how much the person knows about computers and how to safely use them, what websites are safe to enter personal details into, what websites are fake and much more. Therefore with there being so many factors, lots of training and practice is required to prevent you from becoming a victim of cybercrime. In one case of cybercrime on social networking sites, Bryan Rutberg had his Facebook account hacked and he could not take back control. ...read more.

try many different words to guess a person's password possibly leading to the access of your account whether it be a social networking site or a more severe case, a bank account. The main problem people have is that they cannot remember the passwords if they are too difficult so they deliberately make their password very simple which is not always the best idea, the main way to make a password much harder to guess is by making it at least 8 characters long being constructed with letters (UPPER CASE and lower case), numbers and symbols. E.g. Aa1!Ss2", this makes it much harder to guess than qwertyui, which is very commonly used. It is estimated that over 80% of personal computers are infected with spyware and other malicious software that computers can be infected by. "A New York marketing firm that as recently as two weeks ago was preparing to be acquired now is facing bankruptcy from a computer virus infection that cost the company more than $164,000.""Hackers in Europe and China successfully broke into computers at nearly 2,500 companies and government agencies over the last 18 months in a coordinated global attack that exposed vast amounts of personal and corporate secrets to theft, according to a computer-security company that discovered the breach ... ...read more.