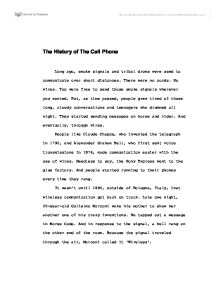 The History of The Cell Phone

The History of The Cell Phone Long ago, smoke signals and tribal drums were used to communicate over short distances. There were no cords. No wires. You were free to send those smoke signals wherever you wanted. But, as time passed, people grew tired of those long, cloudy conversations and teenagers who drummed all night. They started sending messages on horse and rider. And eventually, through wires. People like Claude Chappe, who invented the telegraph in 1792, and Alexander Graham Bell, who first sent voice transmissions in 1876, made communication easier with the use of wires. Needless to say, the Pony Express went to the glue factory. And people started running to their phones every time they rang. It wasn't until 1894, outside of Bologna, Italy, that wireless communication got back on track. Late one night, 20-year-old Gulielmo Marconi woke his mother to show her another one of his crazy inventions. He tapped out a message in Morse Code. And in response to the signal, a bell rang on the other end of the room. Because the signal traveled through the air, Marconi called it 'Wireless'. ...read more.

It's not surprising that it's a hit. Then there are the colorful Nokias with the interchangeable facades. If you're in the business world, you don't want to be seen with one of these babies. They are for teenagers, the latest target market in the ever-expanding cell phone business. They are cherry-colored, lime green, and bright yellow. They accessorize. They are the Volkswagen Beetle or the iMac of cell phones. The basic concept of cellular phones began in 1947 when researchers looked at crude mobile (car) phones and realized that by using small cells (range of service area) with frequency reuse could increase the traffic capacity of mobile phones substantially, however, the technology to do it was nonexistent. Anything to do with broadcasting and sending a radio or television message out over the airwaves comes under a Federal Communications Commission (FCC) regulation that a cell phone is actually a type of two-way radio. In 1947, AT&T proposed that the FCC allocate a large number of radio spectrum frequencies so that wide-spread mobile telephone service could become feasable and AT&T would have a incentive to research the new technology. ...read more.

created a standard specification based on the requirements the CTIA had recommended. The TDMA Interim Standard 54 or TDMA IS-54 was released in early 1991. The technology was tested that same year in Dallas and Sweden. In 1994, the FCC announced it was allocating spectrum specifically for PCS technologies at the 1900 MHz band. Remember the old days when all you could do with a cellular phone was make a call? And then you could only do so if you were in the right calling area or outside of a steel-framed building? Today's cellular phones seem to be approaching laptops in sophistication ... not only can you use one to balance your checkbook, you can also listen to some Mozart when a call comes in. To make these new phone services available to downtrodden consumers everywhere, the phone companies and service providers have teamed up to bring us a huge array of completely confusing service plans. You can get analog, or digital, or both. You can get local coverage, or global coverage. You can get free minutes, or you can pay by the minute. You can get 10 cents per minute, or you can get 30 cents per minute. You can get call forwarding, return call, caller ID and even your own personal 800 number. ?? ?? ?? ?? 2 ...read more.