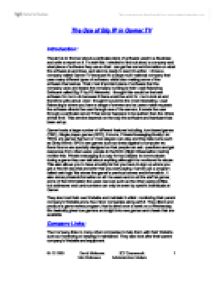 The Use of Big IP in Gamer.TV.

The Use of Big IP in Gamer.TV Introduction: The aim is to find out about a particular piece of software used in a Business and write a report on it. To start this I needed to find out about a company and what piece of software they use so that I can gather some information on what the software is and does, and also be ready to see it in action. I chose a company called Gamer.TV because it's a large multi-national company that uses many different types of software, whilst also making some of the software themselves. Their most important piece of software that the company uses and keeps the company running is their Load Balancing Software called Big IP by F5 Networks. I thought this would be the best software for me to do because it there would be a lot for me to look at and therefore write about. Also I thought it would be the most interesting. Load Balancing is where you have a range of servers and as users make requests the software directs the user through one of the servers, it sends the user through a particular server if that server happens to be quicker than the others at that time. This service depends on the way the software and hardware has been set up. Gamer hosts a large number of different features including, turn based games (TBG), Single player games (SPG), Forums, Private Messaging Buddy List. TBG's are games that two or more players can play and they take turns such as Dinky Bomb. ...read more.

Big IP is also a good piece of software due to the fact that it runs alongside so much other software, such as What's Up Gold and Gamers Lobby system etc. So many of the Load Balance software's I have looked at during this project required certain software to run alongside. This is more complicated for the business and the Administrators. Software Users and User Role: They use XP Pro for their Operating system this is because it is easier to set up a VPN line because XP Pro comes with the VPN line built in. The Software is more of specialised software so there are not many users, plus it pretty much runs itself except for the monitoring part. It has to be monitored by the people in the NOC and he technicians/Systems Administrator, this is because if one of the servers does go down, then one of them can swap it over, and the software will e-mail the technicians to say that the server is down and needs repairing. Once this e-mail has gone out and the technicians have repaired the fault it will generally stay as the redundant server until the Systems Administrator decides to have the working server in for maintenance. This usually happens at Gamer about every 6 months where the working server gets swapped with the redundant. Gamer.TV have one database and if it went down then all of their system would go down. Everything that Gamer has on their Website is in the database so nothing would work. This means that every week the database needs to be backed up, they do this by having two different arrays. ...read more.

He would act as a Systems Administrator, so basically it hasn't taken jobs away it's just taken some of their job description away, however as ICT grows, so does their work. Data Protection Act The data protection act doesn't really count in this case because it's about servers not about information that could be used in a harmful way, obviously inside the company there would be things set in place so that the privacy act is kept. Security The security is high at gamer, they have plenty of security guards and also to get into the building you have to have a special electronic pass. To get on to the computers or the network you need a special user name and password this is set up by the network specialist which means he deals with any problems with the privacy and the users who use the network. How Big IP was brought into the company Big IP was brought into the company after it was researched and found out to suite their system best. They installed the software onto their servers and they had some minor faults such as it was giving improper readings via their monitoring system, but they sorted out the bugs by going to F5 Networks and asking what they could do and they responded by sending an special upgraded version to them that would clear the problems that they were having. Backing Up It would be very difficult to back up Big IP but they do back up the days events and all the print screens of the monitoring system which would then incorporate some of Big IP's information. 1 05-12-2003 David Mckeown ICT Coursework Mrs Dickenson Administration Module ...read more.