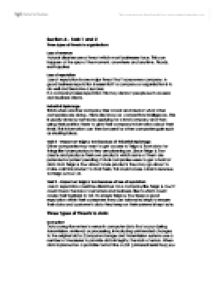 Threats to Organisations and Systems. Describe the countermeasures available to an organisation that will reduce the risk of damage to information.

Section A - Task 1 and 2 Three types of threats to organisations Loss of revenue Natural disasters are a threat which most businesses face. This can happen at the spur of the moment, anywhere and anytime. Floods, earthquakes Loss of reputation Loss of reputation is one major threat that faces every company. A good business reputation is essential if a company or organisation is to do well and become a success. If a company losses reputation this may detract people such as users and business clients. Industrial Espionage This is when another company tries to look and steal at what other companies are doing , this is also know as competitive intelligence. This is usually done by someone applying for a rival company and then using their position there to give their company information about their rivals. This information can then be used for other companies gain such as stealing ideas. Task 2 - Impact on Teign & Tow because of industrial Espionage Other companies may want to get access to Teign & Tows data for things like future products they are planning on. Since Teign & Tow create and produce their own products which some of them are patented or patent pending. If rival companies were to get a hold of data from Teign & Tow about future products they may go about to make a similar product to rival theirs, this could cause a loss in revenue for Teign & Tow Ltd. Task 2 - Impact on Teign & Tow because of loss of reputation Loss of reputation could be disastrous for a company like Teign & tow; it could mean the loss of customers and business clients which could cause their business to fail. To ensure Teign & Tow keep a good reputation within their consumers they can take extra steps to ensure their data and customer's data they keep on their systems is kept safe. ...read more.

Facial recognition machines and finger print scanners would be a great way to detect a fake employee, most obviously Teign and Tow would need to do a full security check on all current employees and all potential employees every so often to make sure nothing devious is taking place. Cryptography techniques could be used as a way of tightening up on valuable data. Section B - Implementing Security Describe the countermeasures available to an organisation that will reduce the risk of damage to information - P3 - Task 1 Teign and Tow could take up many measures in reducing the risk of damage to data. Data loss is a massive threat to this company; usually human error could be at fault of this. Backups are a fundamental step, there would need to be many backups to ensure that if the worst case scenario happens and the data is lost then the company have the choice of an external device to use, most common device would possibly be an external HDD. Special steps need to be taken out on the internet as the Teign and Tow employees would use the internet on a frequent basis, internet security would also be a top priority as the companies IP address is now out in the open etc. transmitting data over the internet is an enormous risk. Data encryption could be used as a cure for sending priceless data over the internet; this would work when one employee can send data to only one other person via encryption. Updates need to be kept up to date as this would leave the systems very vulnerable as this now would be class as an old piece of software therefore many hackers could eventually hacker into a particular program. Not only hackers but many viruses could cause havoc which leads to useful money being spent on repairing a system or purchasing a new system. ...read more.

shouldn't be that certain that their security software could fight off the same virus again, because this virus could have developed even robust. So this is why it is adamant that Teign and Tow purchase the high end top spec security software. Human error closely relates with data loss because the main cause of data loss is conceded by a human. Whoever has access to the data is usually the one in charge; they need to be in no doubt that the data stays out of harm's way. The hierarchy of Teign and Tow need to make sure that the data doesn't go out to anyone that shouldn't, anyone in the sense that some of the staff wouldn't be allowed the data; the receptionist for example. There is one event which cannot be stopped is a disaster. Teign and Tow need to plan a sustainable strategy to extract data and make copy, also keeping up to date with these copies. If the worst case scenario occurs then what good is a longstanding copy of the data going to do; nothing, so it is very important that whoever is in charge of updating the data completes this stage appropriately. Teign and Tow in this town would need to make sure that they keep an updated copy of their data in an alternate Teign and Tow office in another town or country all together. This way, if an earthquake was to strike an office in London and some of the data was destroyed, hopefully then there would be a backup copy in Geneva for example. Nowadays the main threats to Teign and Tow are floods, earthquakes and international terrorism. Insurance is also a big factor when it would come to paying out for damages cause by these disasters, Teign and Tow need to make sure they have the correct insurance policy in place so that if they were to make a claim, the insurance company couldn't turn around and state something out of the small print. ...read more.