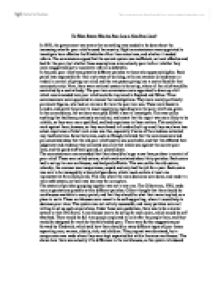 To What Extent Was the Poor Law a New Poor Law?

To What Extent Was the Poor Law a New Poor Law? In 1832, the government was aware that something was needed to be done about the increasing rates for poor relief around the country. Eight commissioners were appointed to investigate how effective the Elizabethan Poor Law actual was, and whether it needed reform. The commission argued that the current system was inefficient, not cost effective and bad for the poor, but whether these assumptions were actually pure truth or whether they were exaggerated just to accelerate reform is debatable. In the past, poor relief was given by different parishes to those who appeared eligible. Each parish was responsible for their own ways of working, with one overseer (a landowner or trader) in control of giving out relief, and the rate payers giving into a central fund for that community only. Now, there was a national system to be set up, where all the relief would be controlled by a central body. ...read more.

This was where the main decisions were done, and made it a more safe system, as there was less way for corruption. The system of parishes grouping together was not a new one. The Gilberts act, 1782, made more organisations possible within different parishes. Gilbert thought that there should be workhouses available to every parish, and that they should be what their name implied, as a place to work. These workhouses were meant to be self-supporting, where it would help to decrease poor rates. This system was not entirely successful, and many parishes were not willing to set up such corporations. Under these new guidelines, there was to be a similar system to that of Gilberts. A workhouse was to be set up for each union, which would be self absorbed. There would be full time people employed to look after the people there, and they would be designed for work by the able bodied poor. There were further suggestions put forward by Chadwick, which said how there should be many different types of poor house separating men, women, elderly, sick, and children. ...read more.

If they were offered work, the council paid some or all of their wages for that day. Similarly, pauper apprentices were quite often orphans or young people who would, in the new system, be sent into a workhouse. This would be where they went to live with a local tradesman, where they were taught the trade, and how to make goods themselves. All of these types of outdoor relief were abolished under the new poor laws, and all of those who were able bodies were put into the workhouse. The new poor law was a new poor law. Due to social, political, and economical circumstances, it was necessary for the time, as the old system was ineffective, inefficient, and bad for the poor. The new laws meant that there were tighter controls over the parishes and the poor; this made less chance of uprisings and rebellions. I agree similarly to the ideas of Digby; recent investigations on the Old Poor Law have produced convergent conclusions. They emphasise that relief under the Old Poor Law was essentially a response to population growth, under-employment, and low wages, rather than their causes as the Royal Commission's report alleged. ...read more.